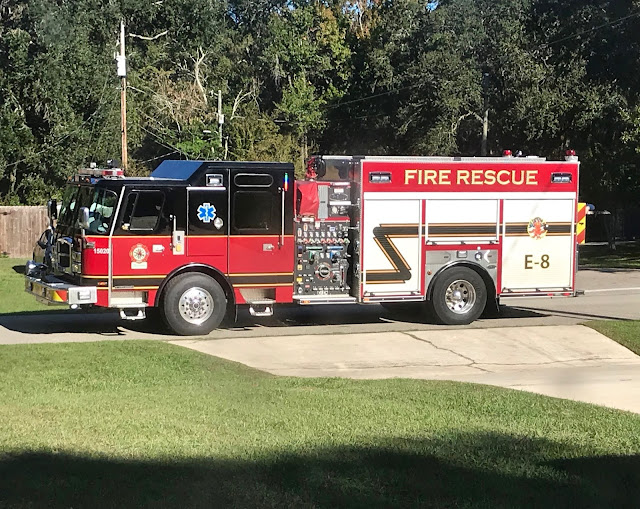 A few weeks ago I woke up to see this fire truck parked at the end of my driveway along with a police car and another fire truck just to the left of it and out of the photo. My next door neighbor had called the fire department because they smelled smoke in their house. It was a little disconcerting until they realized it was nothing more than the fact that they had turned on their heater for the first time since last year and the smell was caused by some dust on the heating coils, which quickly went away. My heater does the same thing every year, so I always make sure I open the windows before I turn it on for the first time.
Posted by Lois at 10:00 AM

...there's some serious money sitting in that rig!

Oh yes, that happens here too. I do the same thing. I'm glad that's all it was.

I am glad it was nothing serious. That smell happens with our heat at first too. Enjoy your day, wishing you a happy weekend ahead!

A scary sight, to be sure!

Glad that was all it was. I had a chimney fire when I lived in Knoxville, and the volunteer fire department came and put it out. I didn't know you had to have chimneys cleaned of the built up creosote. And I didn't know that as a rental, the tenant has to pay for the volunteers to come put out a fire.

Yes … heaters can do that sometimes, but I'm pleased the Fire Dept. came out to investigate.
It's a smart looking truck.

All the best Jan

Even though it wasn't anything to worry about, it gives the fire fighters a chance to test their response time.

Fire trucks are always a good photo subject. This one has a story to go with it.

Did they have to pay for this?
This is a known fact after all...

I have to imagine they were embarrassed