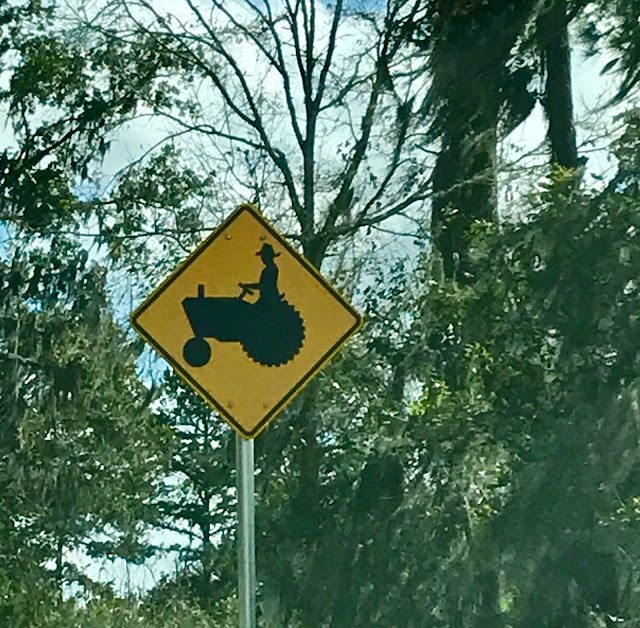 I am used to using toll roads whenever I visit family in central Florida because they are everywhere, most notably the Florida Turnpike. A couple of years ago, the first toll road in this area opened just north of town. I used it for the first time this past weekend and what I noticed the most about it were these signs posted every few miles. I didn't see any tractors crossing though, only the signs. 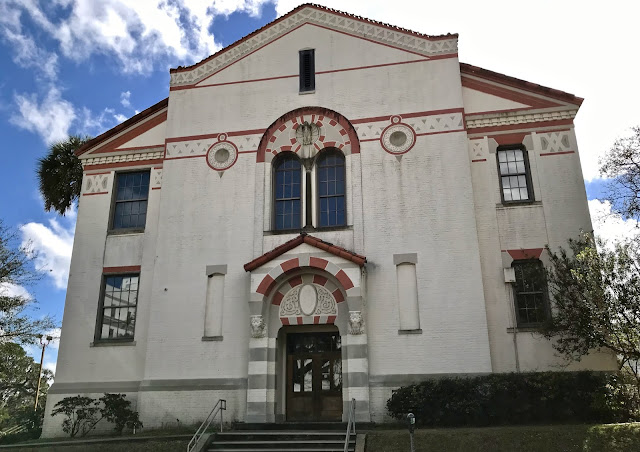 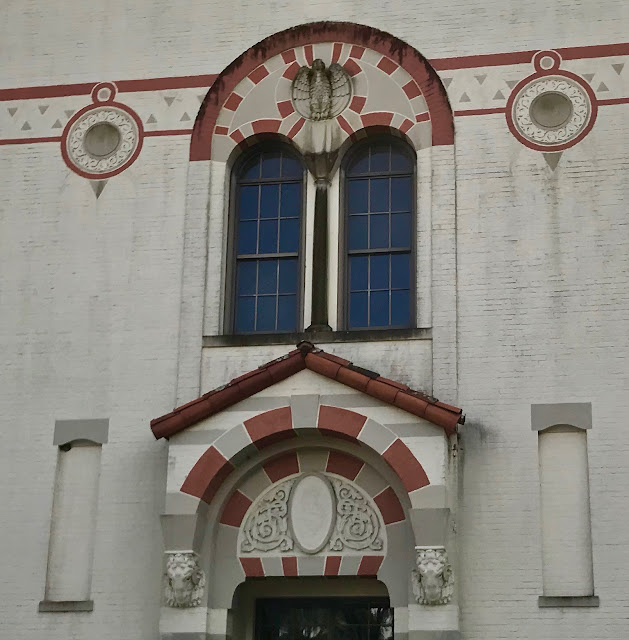 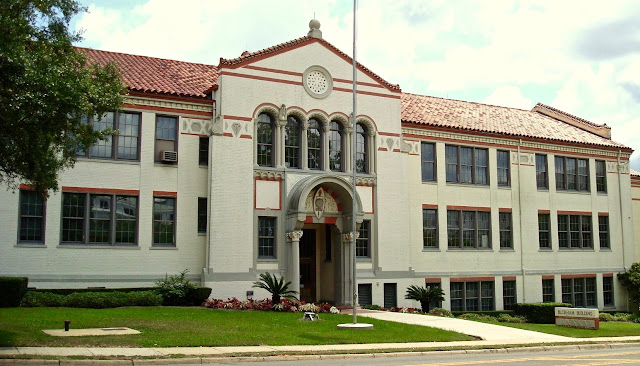 The Bloxham Building, located downtown, was built in 1925 as the Caroline Brevard Grammar School. The two story Mediterranean Revival style brick building features a cross-gabled red tile roof, arched windows, and decorative details. Designed by noted southern architect, William A. Edwards, the building was the first consolidated school in Leon County and is the oldest school building in Tallahassee. The building was sold to the state of Florida in 1964, and in 1966 the name of the building was changed to the Bloxham Building in honor of William Dunnington Bloxham, who served as Florida's governor for two terms (1881-1885 and 1897-1901). It was added to the U.S. National Register of Historic Places in 1987. The building was occupied by Florida state employees for a number of years and is now being used as office space for the Leon County division of Florida Virtual School. I took the first two photos of the side of the building this past weekend and the third photo of the front almost 10 years ago when I showed this building on my blog here.

Linking to Tuesday's Treasures and Our World Tuesday.

This mural is located on the side of the Phaze One Skate Shop located on Gaines Street near the Florida State University campus. It was created by Jules Muck (@muckrock), a mural and graffiti artist based in Venice, California. You can see more of her work here and here. She is really quite talented. 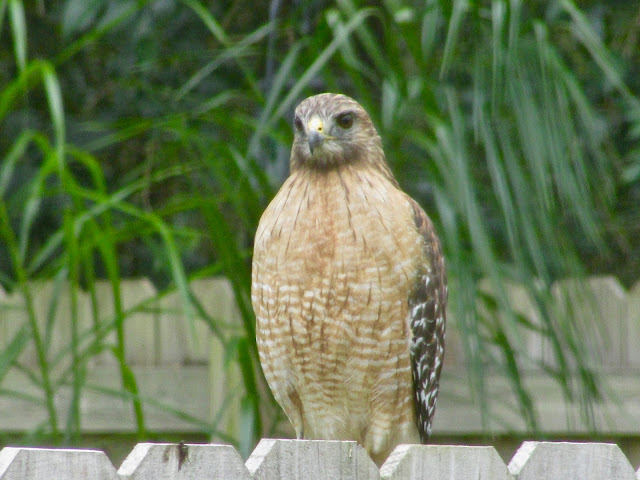 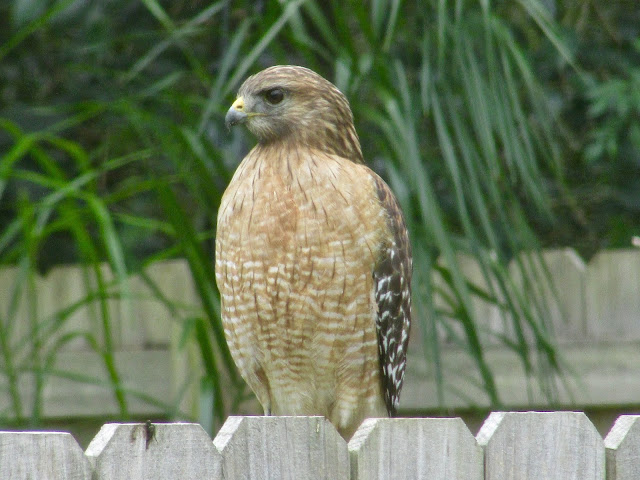 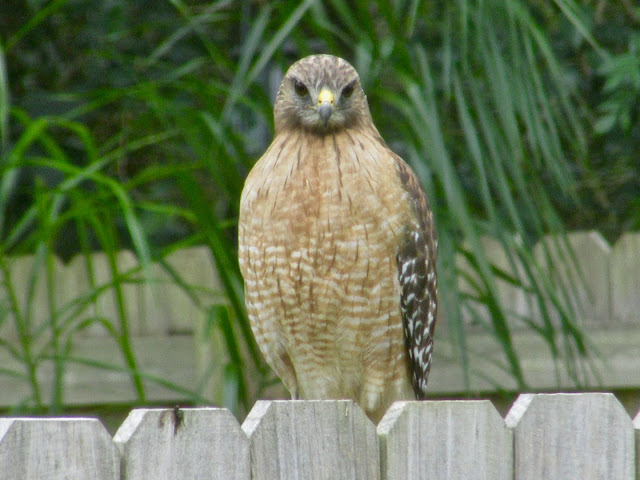 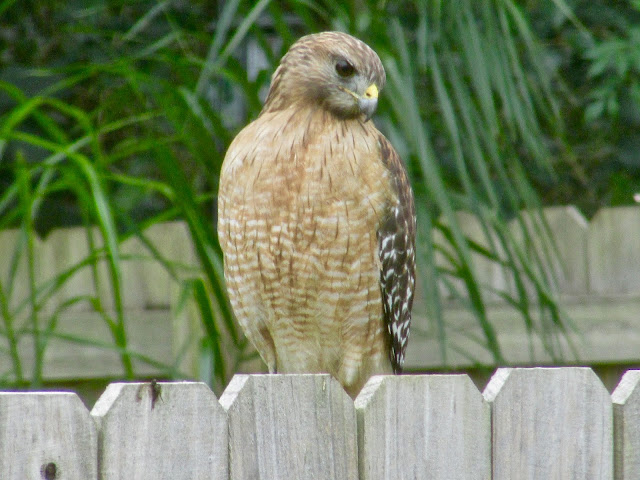 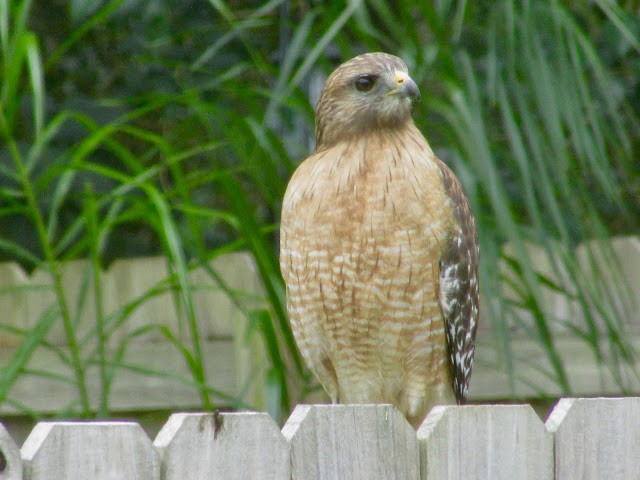 I enjoyed watching this Red-shouldered hawk posing on the fence in my backyard a couple of days ago. Fortunately I had my camera nearby and was able to zoom in for a few close-ups. There are quite a few of these beautiful birds living in my neighborhood. One time I even saw two of them just standing on top of my next door neighbor's car.

Linking to Saturday's Critters, Camera Critters and The Bird D'Pot.
Posted by Lois at 9:49 AM 21 comments: 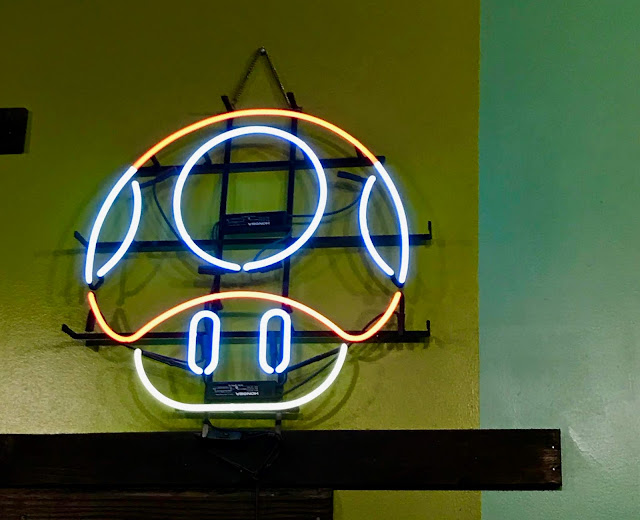 This little neon mushroom was on the wall opposite the mural I posted a photo of here on Monday at a local restaurant called Midtown Pies. I always enjoy seeing neon signs. 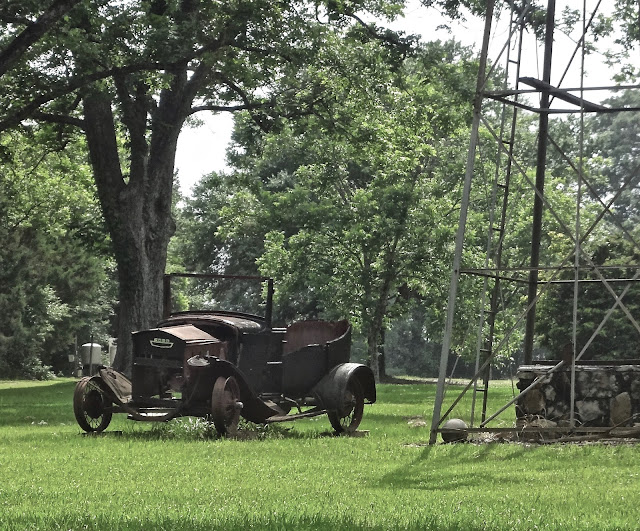 I took this photo along a rural country road while visiting family in a neighboring county. Looks like that old Ford automobile has been parked there for awhile.

Linking to Tuesday's Treasures and Our World Tuesday. 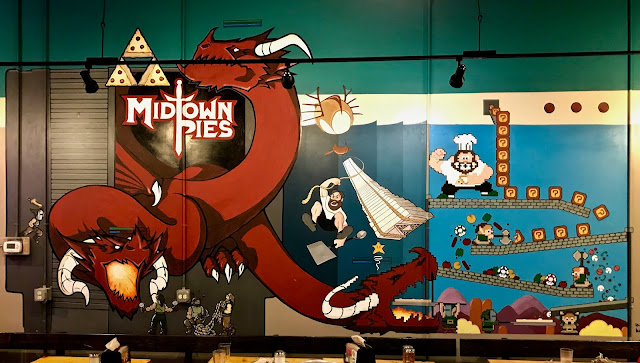 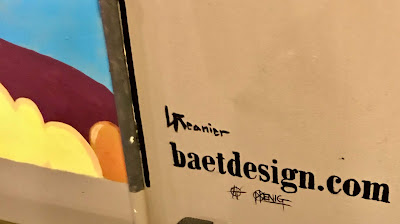 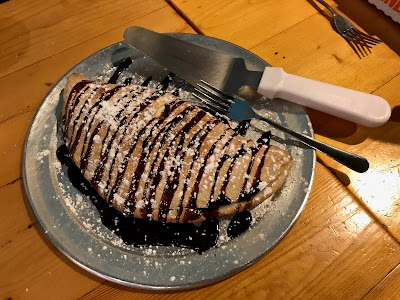 A cool mural on the wall inside local pizza restaurant Midtown Pies. Not only was our pizza really good, but that warm dessert calzone with cheesecake and chocolate filling you see in the third photo was pretty amazing. I shared it with my grandson. 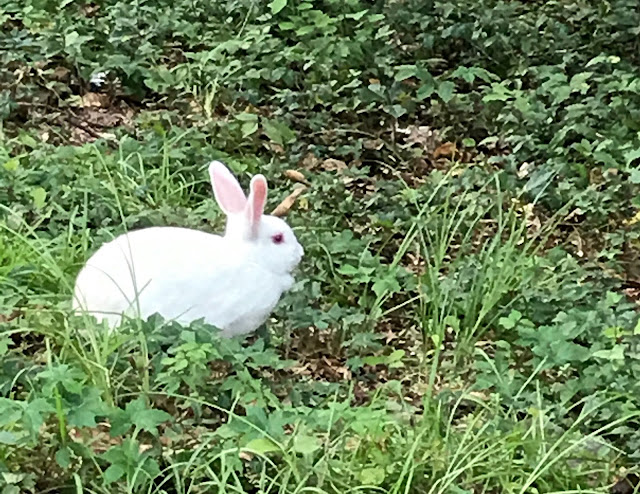 My grandkids and I saw this bunny on the side of the road in front of a wooded area in my neighborhood. Albino or escaped pet? Tell me what you think, because I'm not sure. My grandson took the photo from my car.

Linking to Saturday's Critters and Camera Critters.
Posted by Lois at 12:30 AM 26 comments: 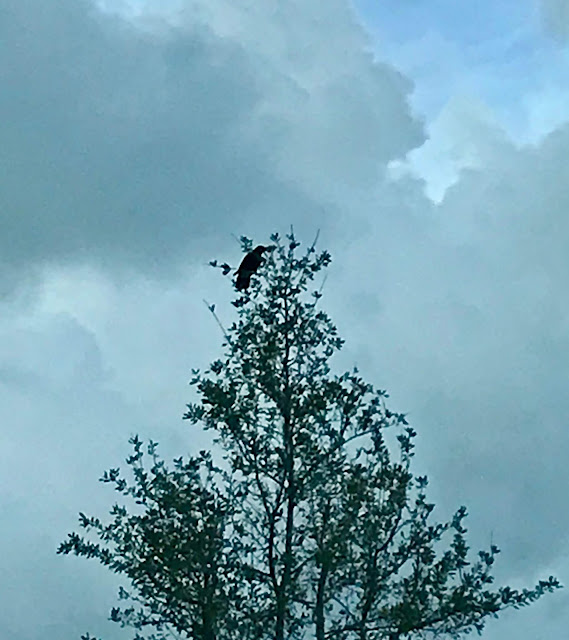 Can you see the blackbird sitting up there in the top of that tree? 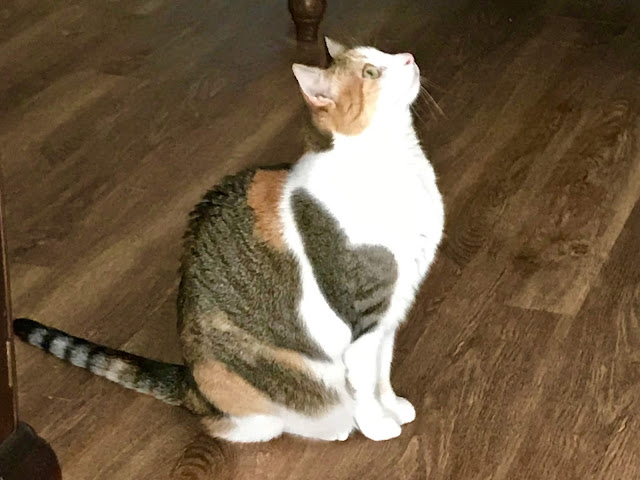 Happy Valentine's Day from my little sweetheart kitty, Cecelia, and me! Today I am thankful for this little fur baby who shares my house with me. I adopted her as a kitten a year and a half ago and it wasn't long before I noticed that misshapen heart on her shoulder. She is always wearing her heart on her sleeve!

Linking to Thankful Thursday and My Corner of the World. 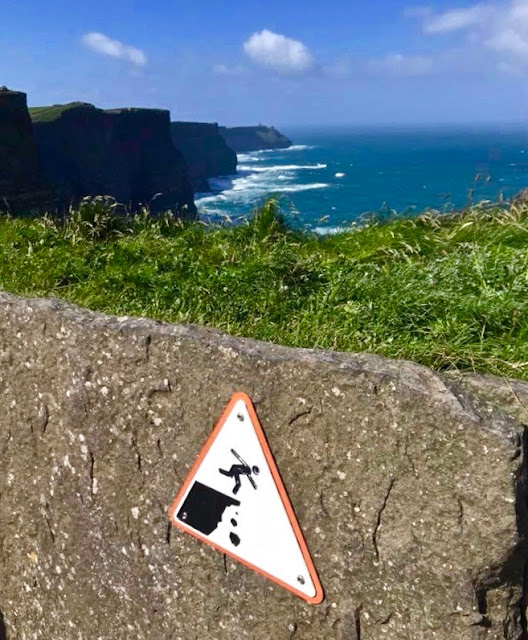 I took this photo when I was visiting the Cliffs of Moher on the west coast of Ireland last summer. Just past that sign is the edge of the cliffs. You can see how high they are and how steep the drop is down to the ocean in the background of the picture. You wouldn't think a sign like this would be needed near such high and dangerous cliffs, but just last month I read an article about a man who fell to his death from these very cliffs while he was attempting to take a "selfie". 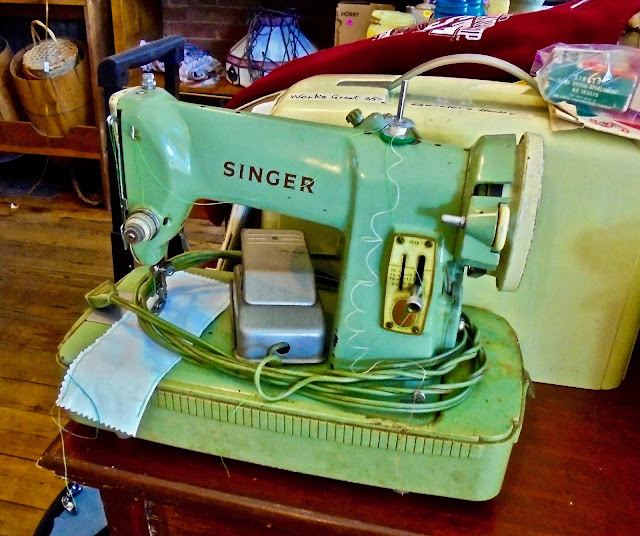 I absolutely love the color of this old sewing machine I saw in a thrift shop.

Linking to Tuesday's Treasures and Our World Tuesday.
Posted by Lois at 12:30 AM 17 comments: 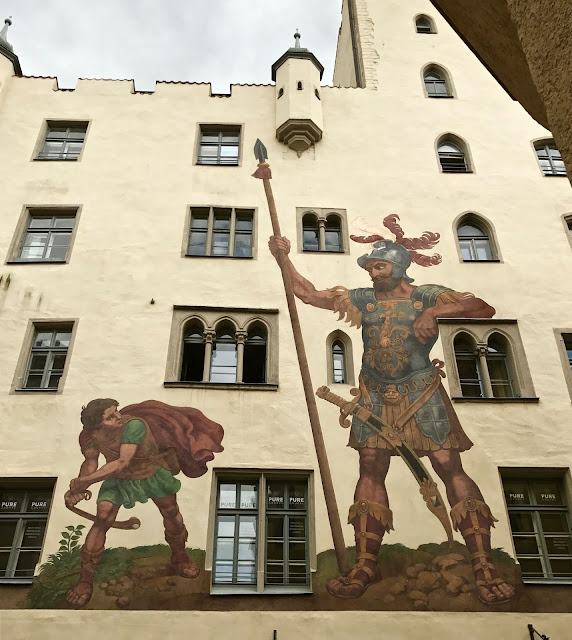 A photo I took of The Goliath House (Goliathhaus) in Regensburg, Germany a couple of years ago. The house was built around 1260 and features a mural created by Melchior Bocksberger in the year 1573 which depicts the battle scene from the legend of David and Goliath. I like the way Goliath appears to be resting his arm on the window frame. 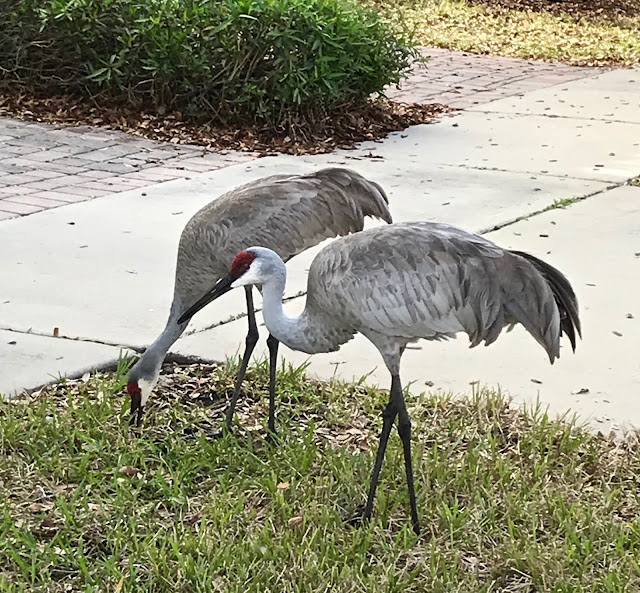 While I was visiting my daughter and grandkids in Orlando last week, my granddaughter and I saw these two Sandhill Cranes foraging around in the grass right by the driveway in front of their house. They didn't seem to mind us following them down the sidewalk to get some photos and this video. My granddaughter made those noises you hear in the video so they would look up from whatever it was they were looking for in the grass, but most of the time they just ignored us.

Linking to Saturday's Critters, Camera Critters and The Bird D'Pot. 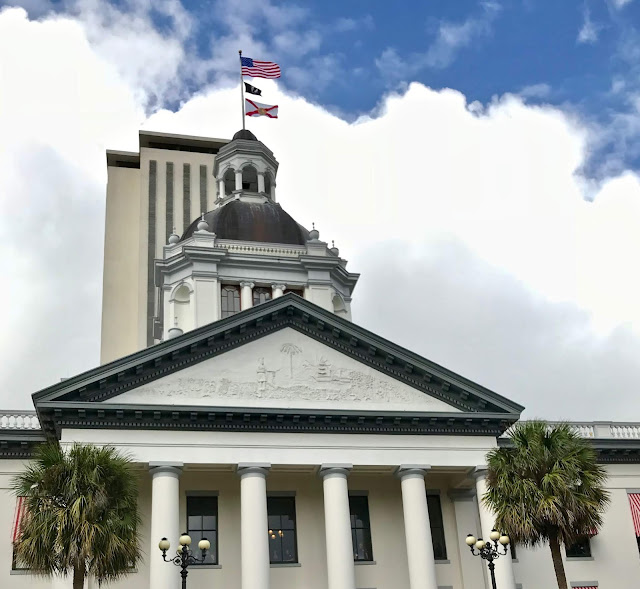 I haven't shown a photo of Florida's historic old Capitol in awhile, so here's a recent one. That tall modern building behind the dome is the newer one that is actually in use. The old one serves as a museum and you can read more about it here.

Linking to SkyWatch Friday.
Posted by Lois at 12:30 AM 15 comments: 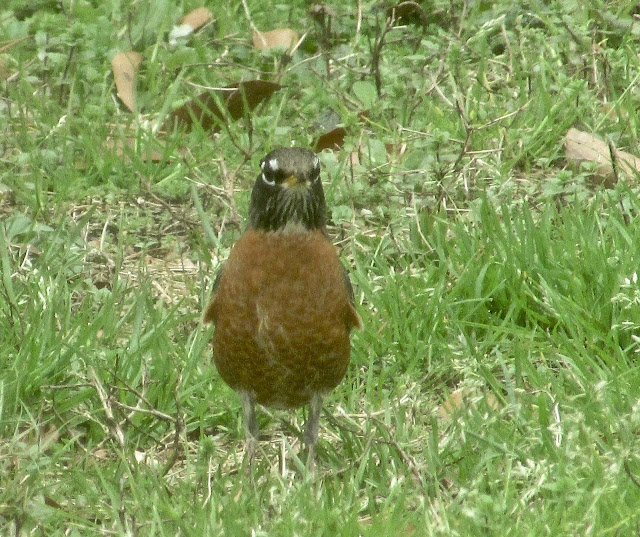 Today I am thankful for backyard visitors like this little robin, which means spring is on the way. When I zoomed in, I noticed he was looking right at me. This is the only time of year we see robins in our area. They usually stay for a couple of weeks and then move on further north.

Linking to Thankful Thursday and My Corner of the World.
Posted by Lois at 12:30 AM 19 comments:

Labels: birds, My Corner of the World, Thankful Thursday 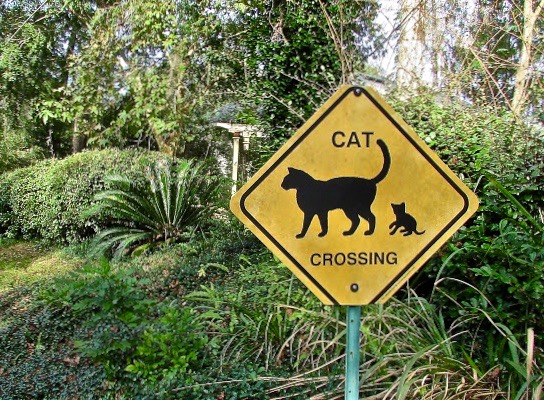 This is the second time I've seen a sign like this in one of the neighborhoods around town. I thought it was kind of cute, but I don't think it's a good idea to let cats wander around where they can get hurt. My own kitty is an indoor cat and she's perfectly fine. 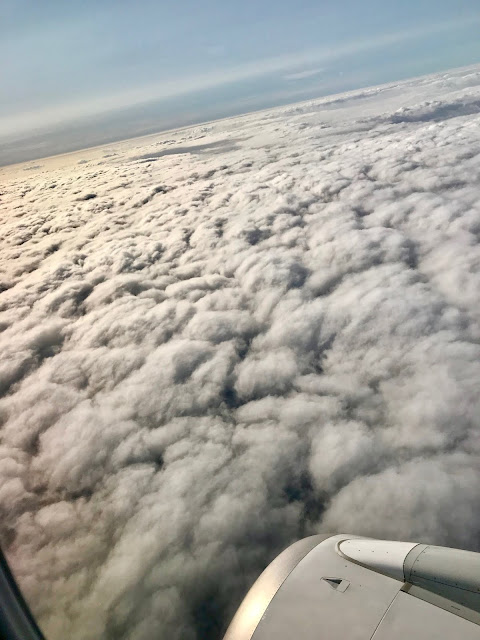 I always enjoy looking at fluffy white clouds outside of my window when I am flying. The first day of the month is Theme Day in the City Daily Photo community and this month's theme is "White". You can visit the CDP Theme Day gallery here to see other members' interpretations of the theme.
Posted by Lois at 12:30 AM 19 comments: