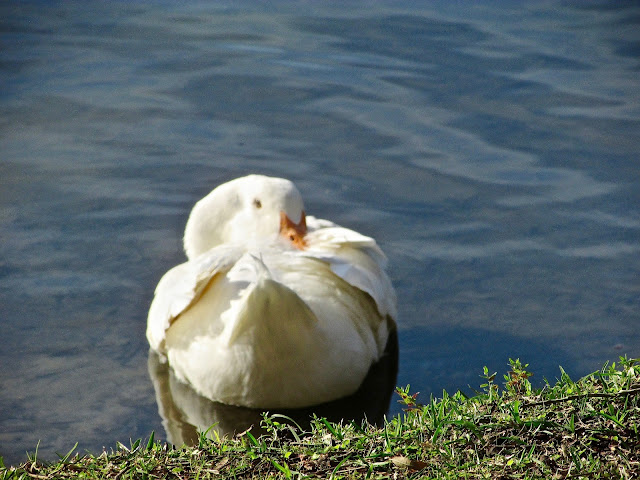 I think this duck was trying to settle in for a late afternoon nap, but it was definitely keeping one eye on me when I took this picture at Lake Ella.

I'm putting my blog on a break this week while I enjoy having all three of my grandkids staying at my house. See you soon!

Linking to Saturday's Critters, Camera Critters and The Bird D'Pot. 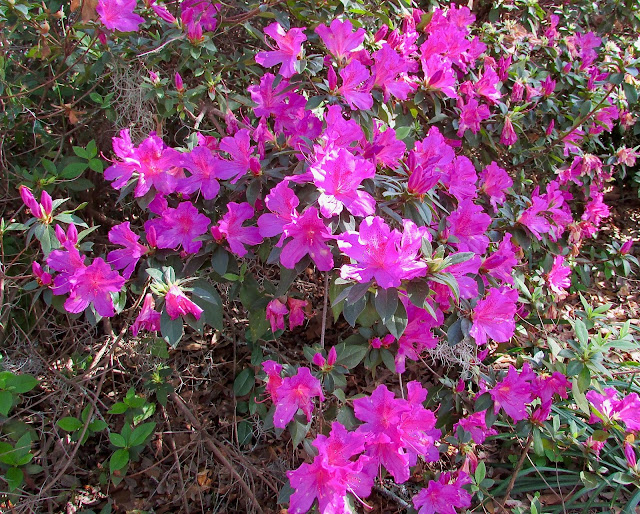 This is what my azaleas looked like before the temperatures dipped below freezing last night. Hopefully it will warm back up around here soon!
Posted by Lois at 10:03 AM 15 comments: 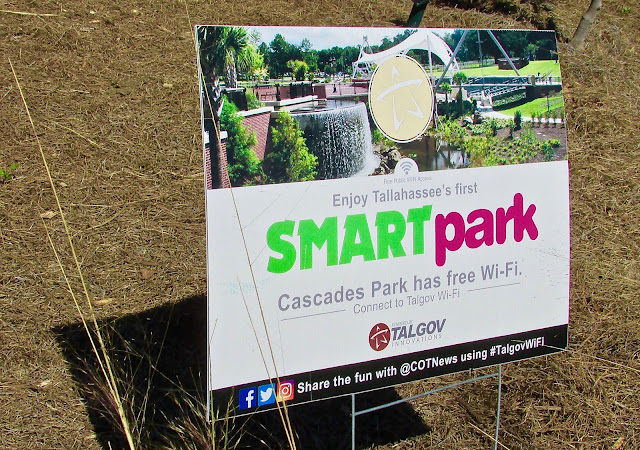 Not only is Cascades Park one of the newest parks in town, it's also smart enough to have free wi-fi. 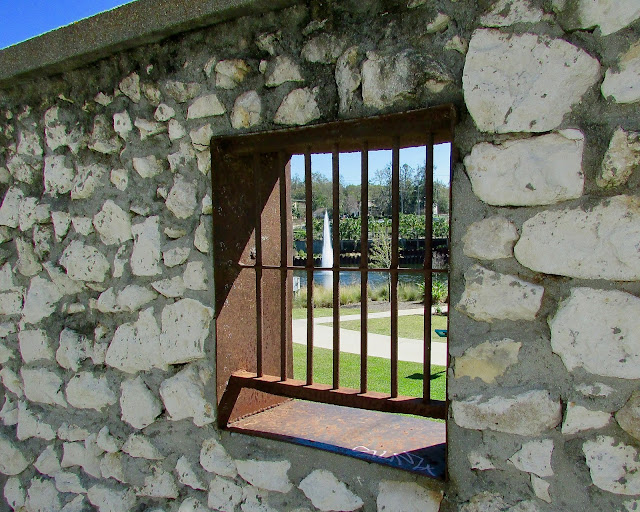 This picture shows one of the original ticket windows where you would have purchased tickets to an event at what used to be known as Centennial Field near downtown. Centennial Field opened in 1924 to celebrate Tallahassee's 100th birthday. It hosted political rallies, graduations, and other community events and served as the home field for Florida State University football and a semi-professional baseball team. It is no longer in existence, but some of its old walls are still standing and surround part of Cascades Park. You can see one of the lakes in the park and a fountain through the old ticket window. You can also see a picture of what the baseball park looked like back in the 1930's here.

Linking to Tuesday's Treasures.
Posted by Lois at 12:30 AM 17 comments: 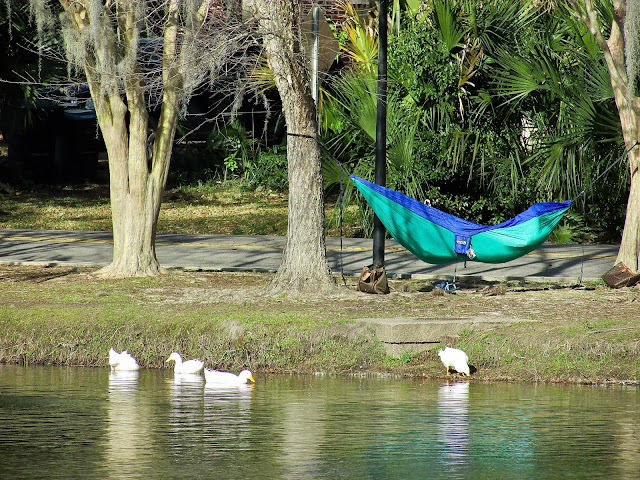 You can't see them, but there are two people in that hammock. I took this picture at Lake Ella.
Posted by Lois at 12:30 AM 17 comments: 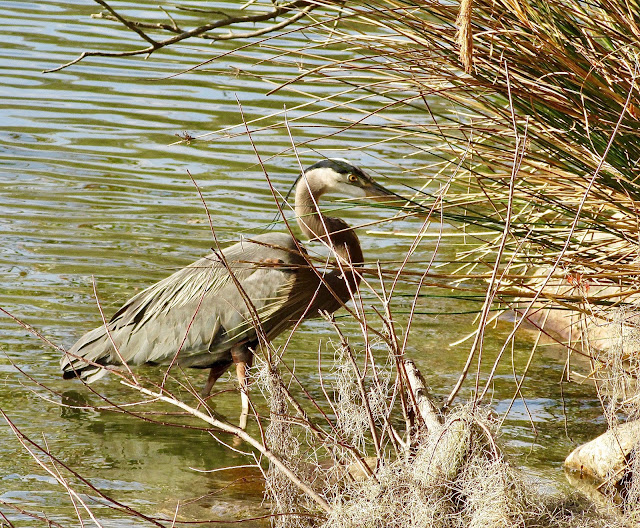 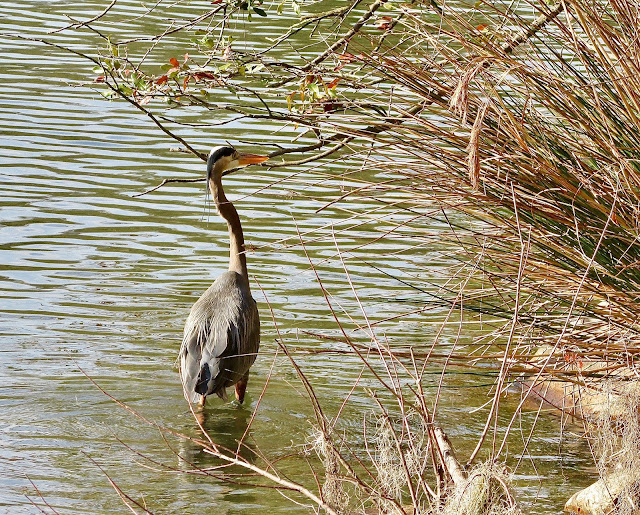 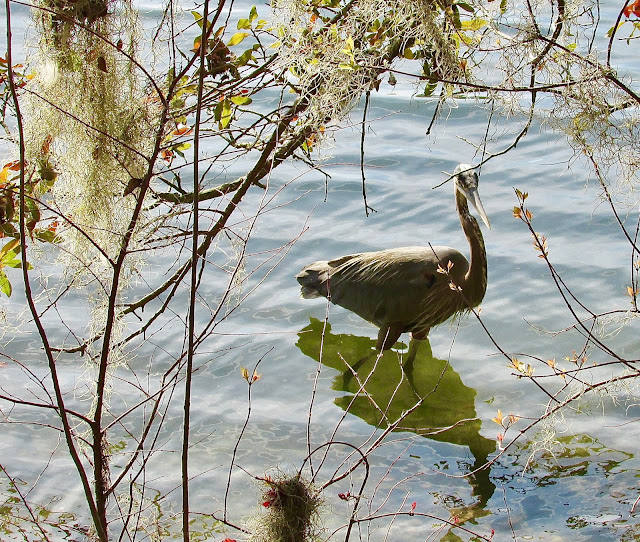 I was doing a pretty good job of stalking this Great Blue Heron on the edge of Lake Ella before a little boy ran up and scared it away. His mother gave him a good scolding, but by then it was too late!

Linking to Saturday's Critters, Camera Critters, and The Bird D'Pot.
Posted by Lois at 10:28 AM 20 comments: 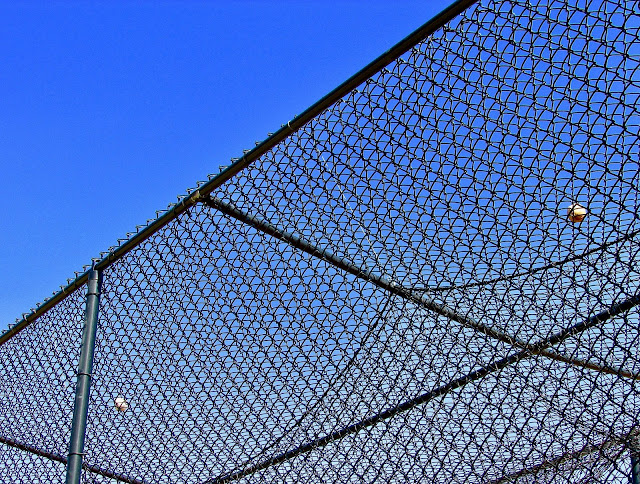 A couple of stray balls sitting on top of the batting cage next to the baseball field in the park near my house.

Linking to SkyWatch Friday.
Posted by Lois at 12:30 AM 13 comments: 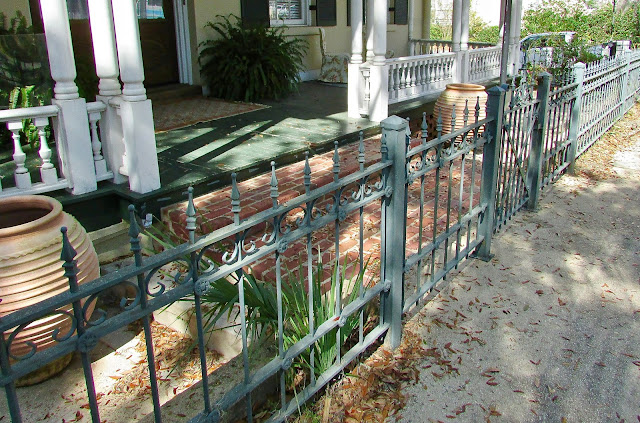 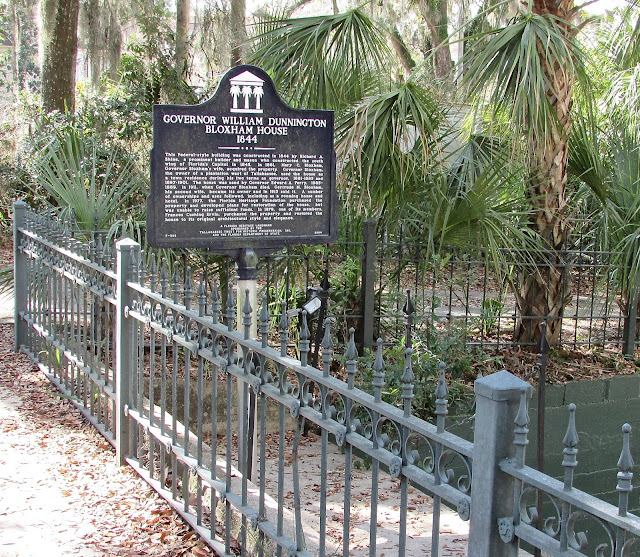 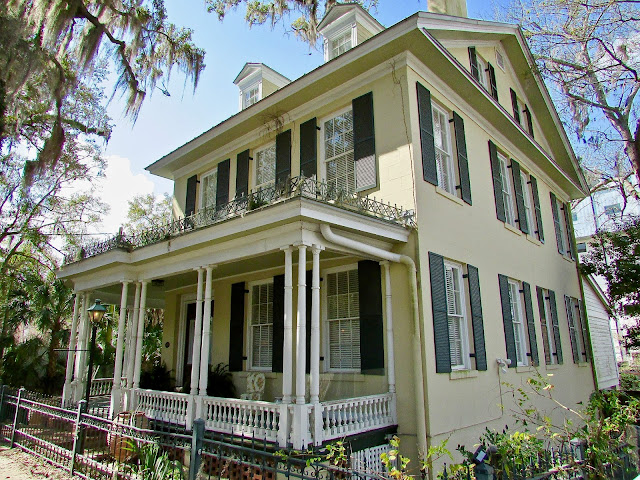 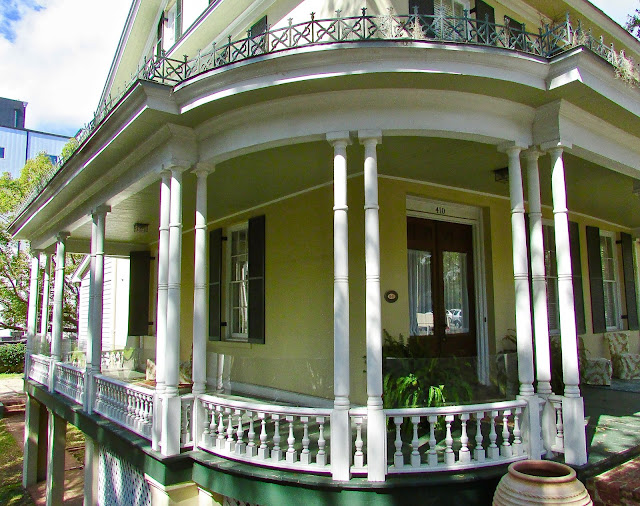 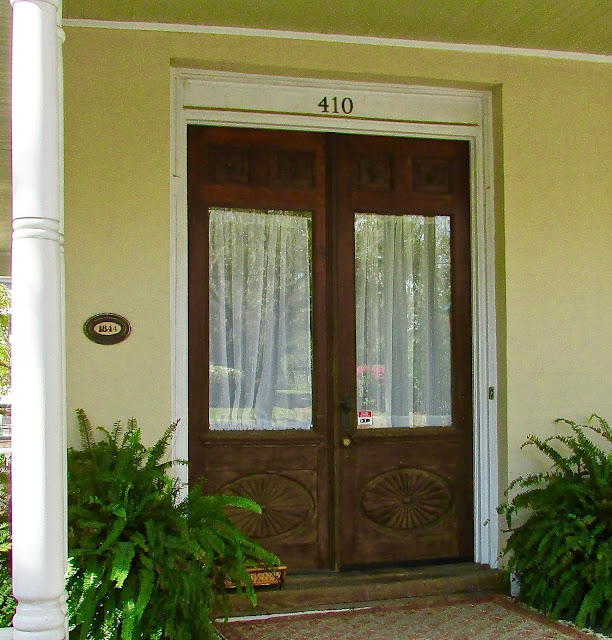 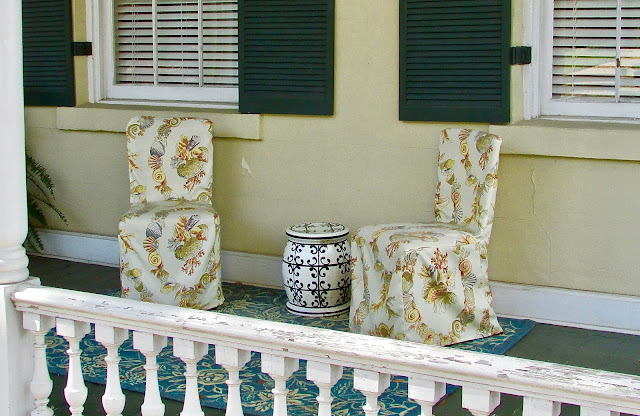 This beautiful old Federal style house sits in the Calhoun Street Historic District near downtown and was built in 1844. It was acquired in 1881 by Mary Bloxham, the wife of Governor William Dunnington Bloxham, who served as Florida's governor for two terms (1881-1885 and 1897-1901). Governor Bloxham owned a plantation west of Tallahassee, but used this house as a town residence. When he died, his second wife became the owner and sold it in 1913. It had a few other owners through the years and had several uses including as a rooming house and a hotel. In 1977, it was purchased by the Florida Heritage Foundation with plans to restore it. The Foundation was unable to raise the funds and it was sold to one of its members, Frances Cushing Ervin, who was then able to restore it to its original style. You can see a photo of this house taken in the early 20th century with former Governor Bloxham standing on the porch with two ladies here.

Linking to Fences Around the World.

Labels: Fences Around the World, houses 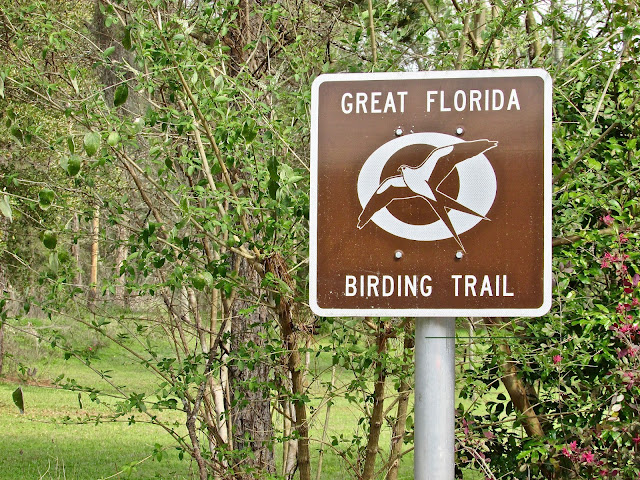 I often see these signs when I am walking at different parks around town. After looking at their website here, I found out that I am in the Panhandle Section of the Great Florida Birding Trail. The website is a great source of interesting information, especially if you are a bird lover like me. 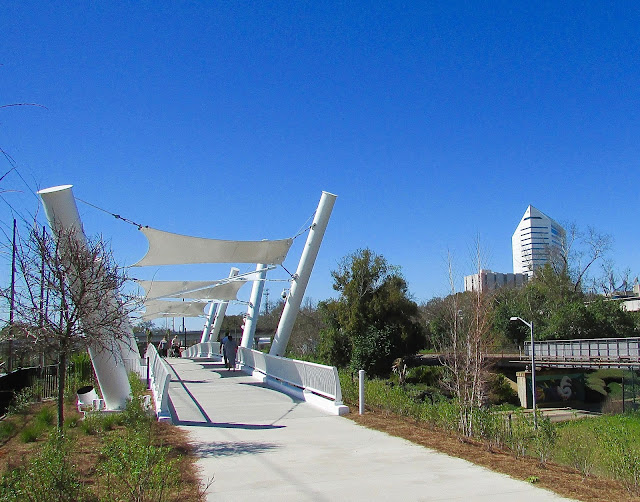 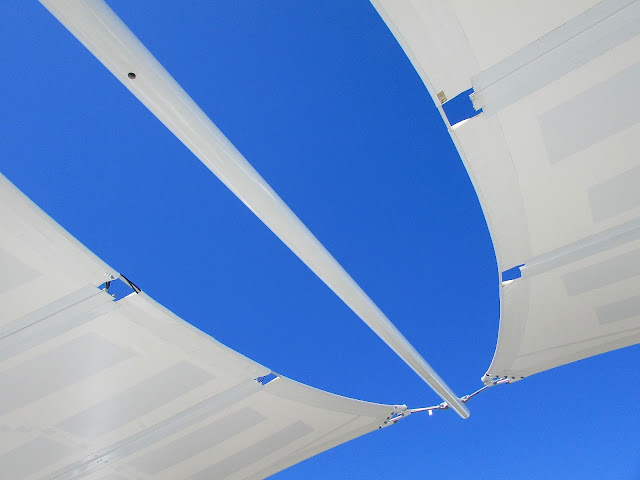 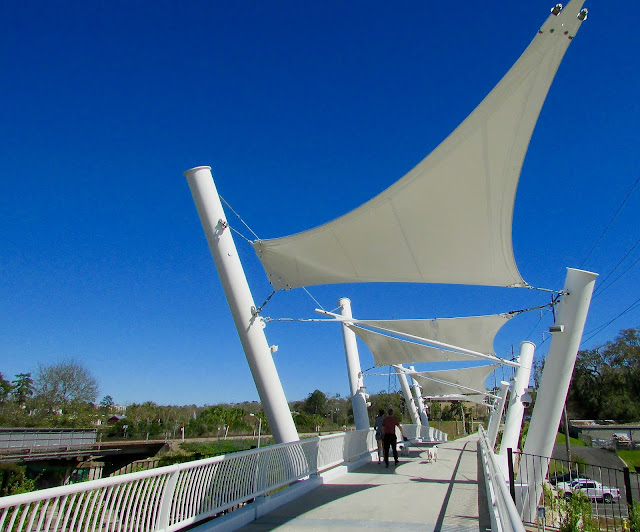 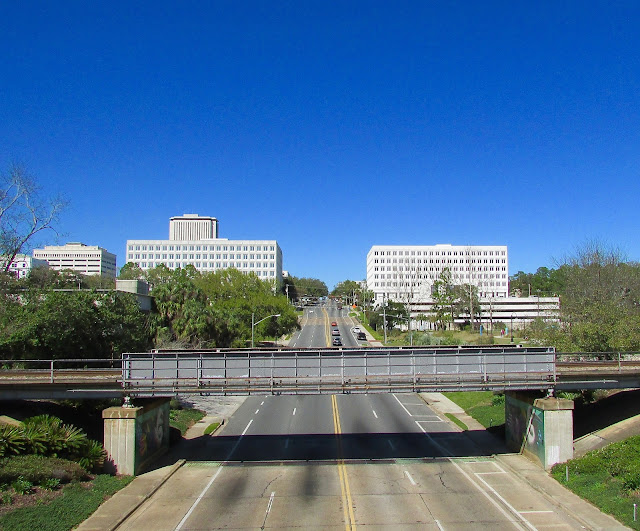 Running parallel to a railroad overpass, the recently completed Capital Cascades Crossing pedestrian bridge spans Monroe Street on the south side of downtown near Cascades Park. I took these pictures on a Sunday afternoon, which is why there is not much traffic on this usually busy street. All of those white buildings are state government offices. The tall building to the right of the bridge in the first shot is the Florida Department of Education building. In the last shot, the two buildings on each side of the street house the Florida Department of Financial Services. My son works in the building on the right. The 22 story Florida Capitol building is peeking over the building on the left side and the other white building behind it houses support offices for the Florida Legislature. If you look closely, you can see two murals underneath the railroad overpass by Toronto artist Birdo (Jerry Rugg), which I featured in a previous blog post last summer here. 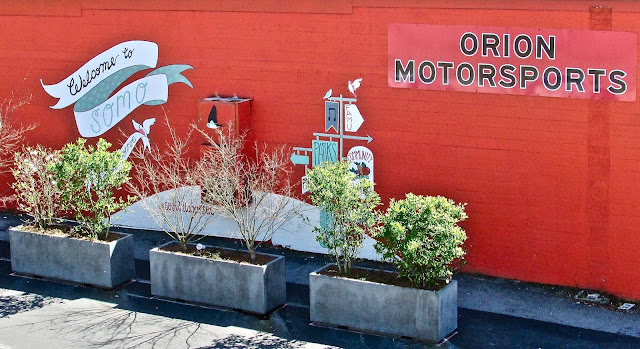 I took this photo of a mural painted on the side of a local business, Orion Motorsports, from a new pedestrian overpass near Cascades Park. I will show some pictures of the overpass later this week. 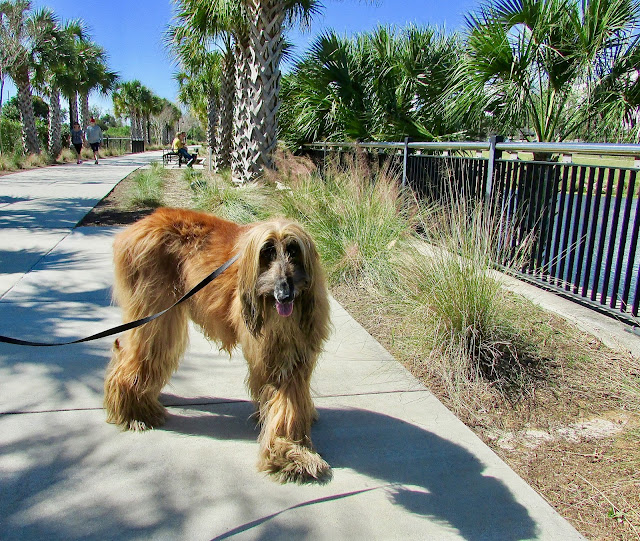 This is Murphy. I met her while on a walk at Cascades Park near downtown. 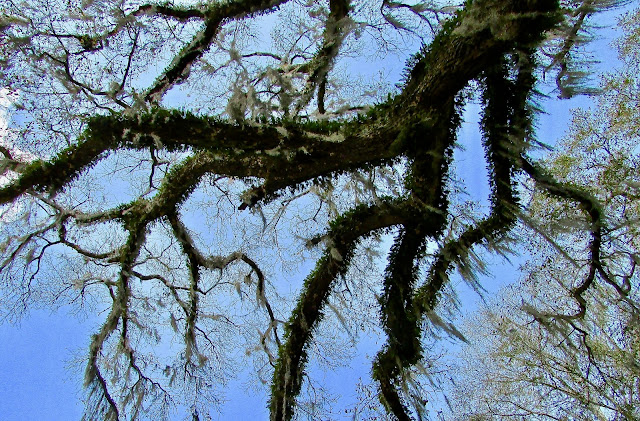 Linking to SkyWatch Friday.
Posted by Lois at 12:30 AM 19 comments:

Fence in the woods 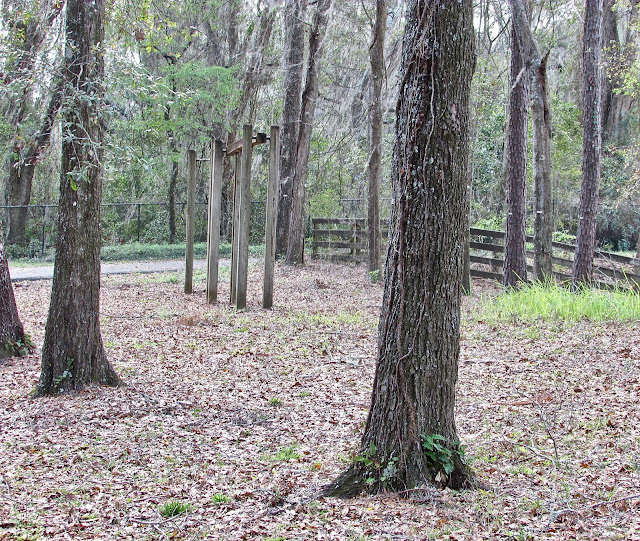 I saw this fence in the woods while on a walking trail near Lake Jackson. I'm not sure what that other wooden thing is, but it looks interesting in the picture.

Linking to Fences Around the World.
Posted by Lois at 12:30 AM 17 comments:

Labels: Fences Around the World 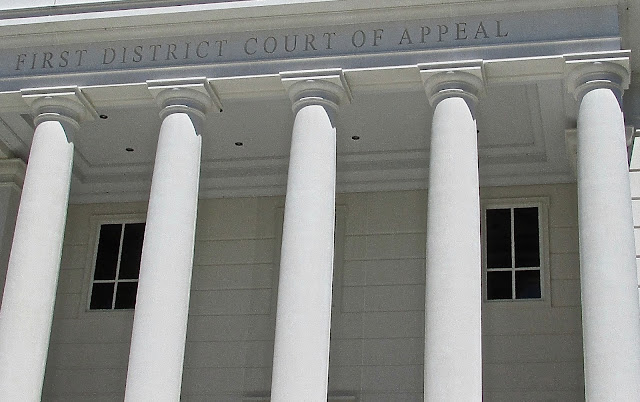 A partial view of some of the columns above the front entrance of the Florida First District Court of Appeal.

The first day of the month is always Theme Day in the City Daily Photo community. This month's theme is "Black and White in Color". To see other members' interpretations of the theme, visit the CDP Theme Day gallery here.
Posted by Lois at 12:30 AM 16 comments: