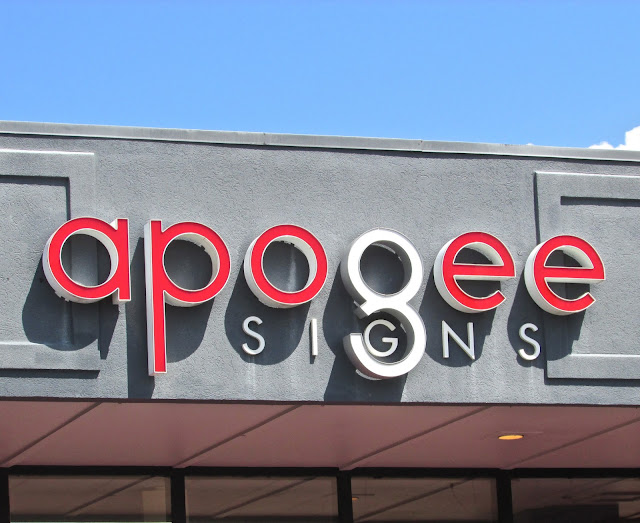 I saw this place across the street from the music store mural I showed on Monday. I like the design. According to Google, apogee means "the highest point in the development of something". I thought it was an interesting name for a sign shop. 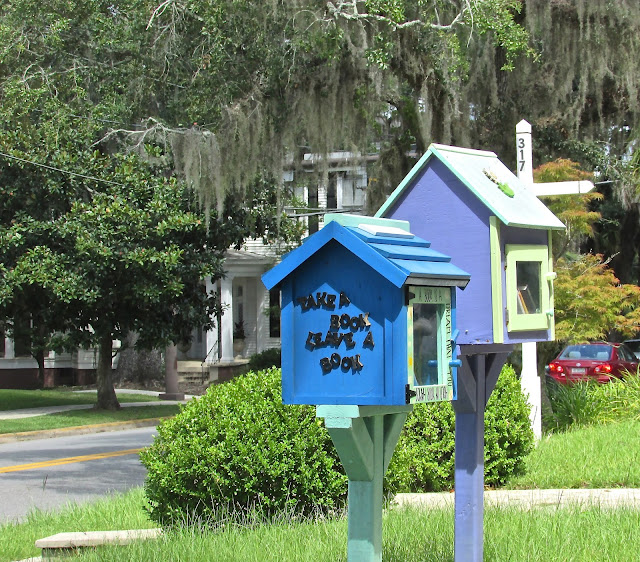 I was headed home from downtown yesterday after getting some theme day photos of our main library when I passed these two Little Free Libraries. Of course I circled the block and came back to get a picture. The old house partially visible in the background is called The White House and I posted a picture of it on my blog several years ago here.

Linking to Our World Tuesday.
Posted by Lois at 1:00 AM 15 comments: 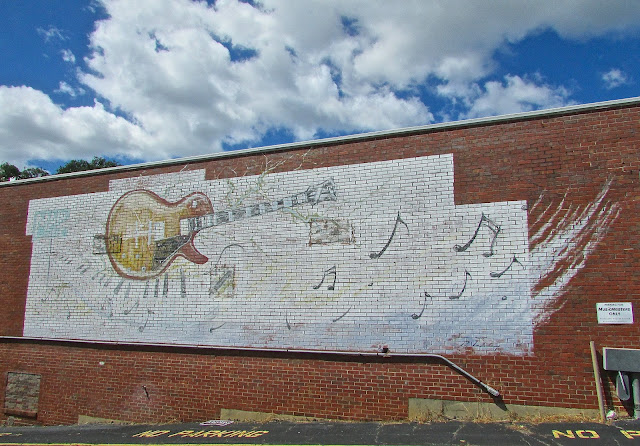 This faded mural is the first thing you see when you park your car in the parking lot of MusicMasters, a locally owned store that has been in business for 40 years. They carry all types of musical instruments, sheet music, music supplies and even offer music lessons. I was there to buy a music stand for my grandson to use while he was attending band camp at FSU this summer. He plays the French Horn in his middle school band. 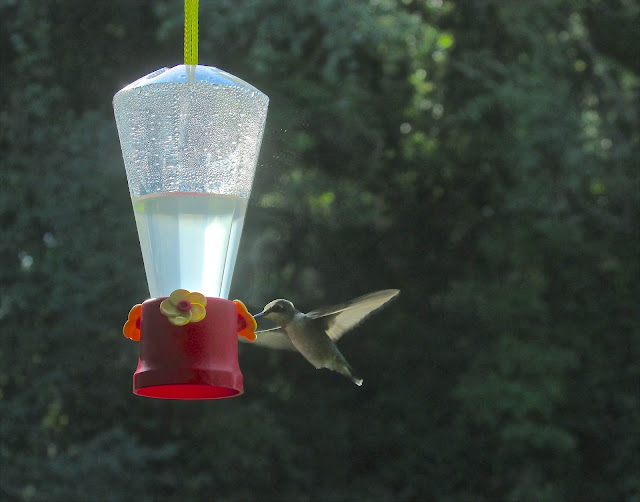 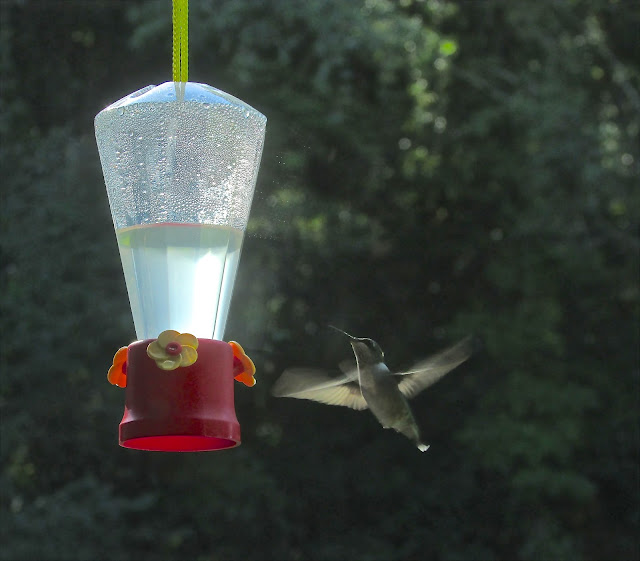 I took these pictures early yesterday morning through my back door window just as the sun was coming up. My back yard is full of hummingbirds right now, in fact they are fighting over this feeder so I think I will be putting up a couple more today. They also like to hang out in the blooms on the shrimp plant under my kitchen window putting on quite a show throughout the day for me and my grandkids.

Linking to Saturday's Critters, Camera Critters and The Bird D'Pot.
Posted by Lois at 9:14 AM 14 comments: 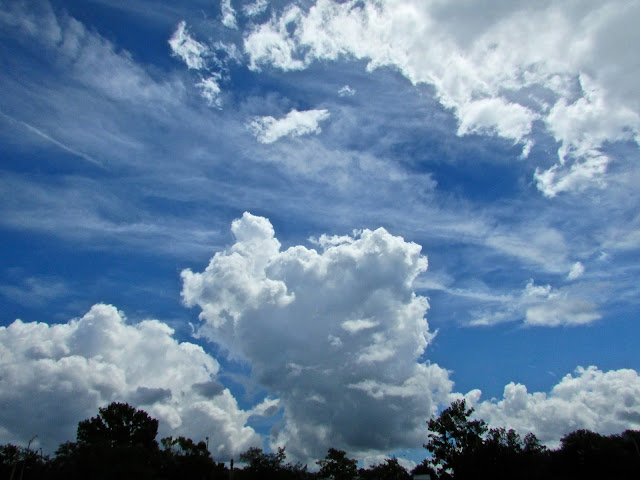 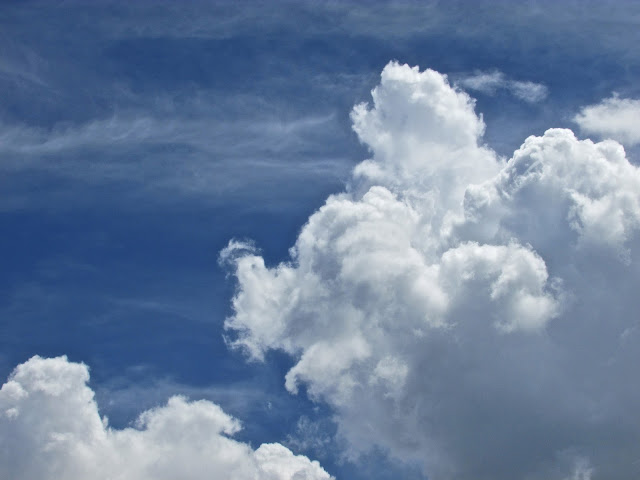 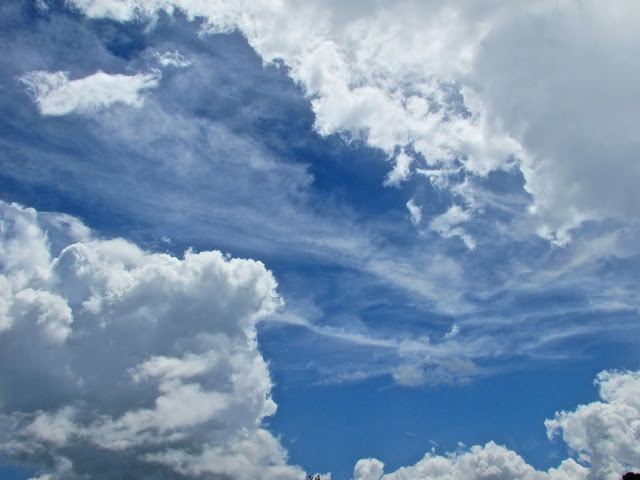 I was out with my camera the other afternoon looking for photographs for my blog. Then I looked up. The sun had been shining all day, but then a storm started rolling in and these clouds were right at the edge of it.

Linking to SkyWatch Friday.
Posted by Lois at 1:00 AM 16 comments: 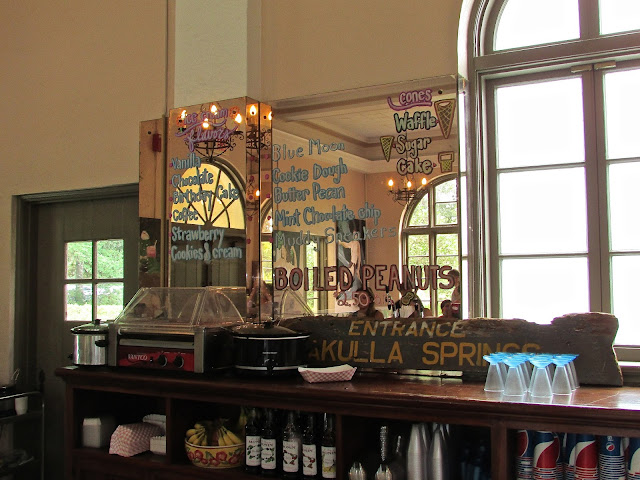 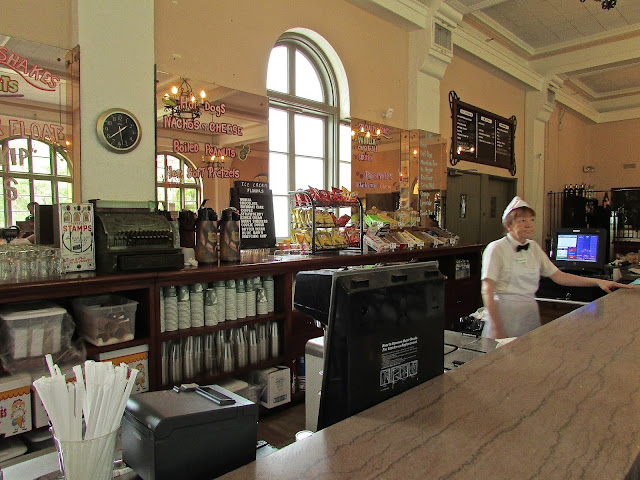 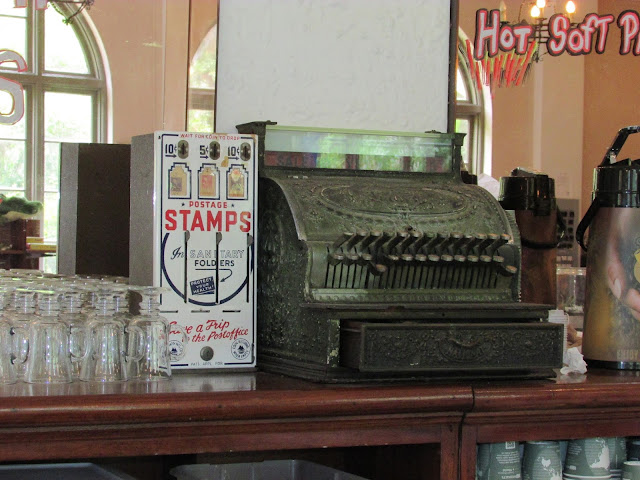 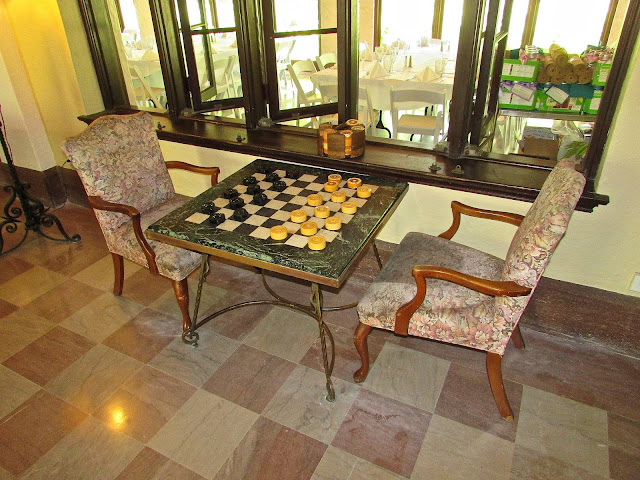 During our visit to the Wakulla Springs Lodge, I took the first three pictures while sitting at the soda fountain enjoying milkshakes with my grandkids. After we finished, we headed for the lobby and my grandkids played checkers on one of several oversized checker boards while I walked around taking the pictures I showed a couple of days ago here. Through the window behind the checker board you can see the front porch set up for an event that was being held later in the day.
Posted by Lois at 2:00 AM 13 comments: 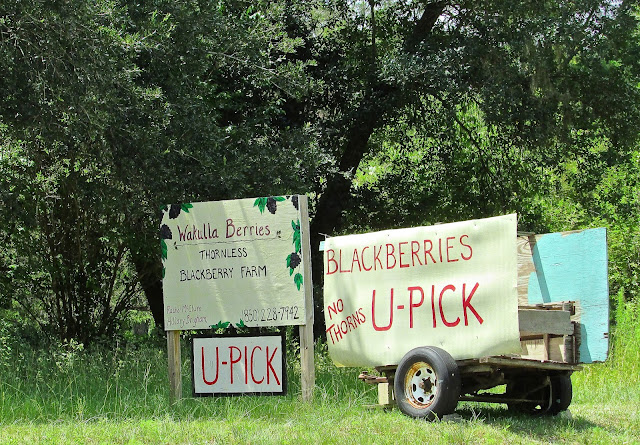 No thorns sounds good to me, especially when you are picking those blackberries yourself! I saw this sign south of town on the drive home from Wakulla Springs. 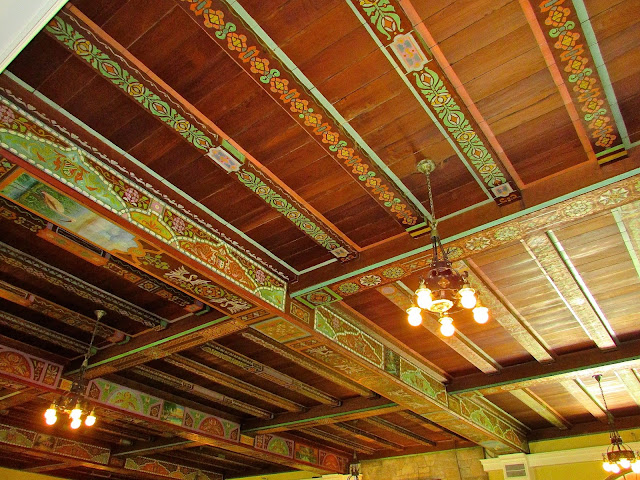 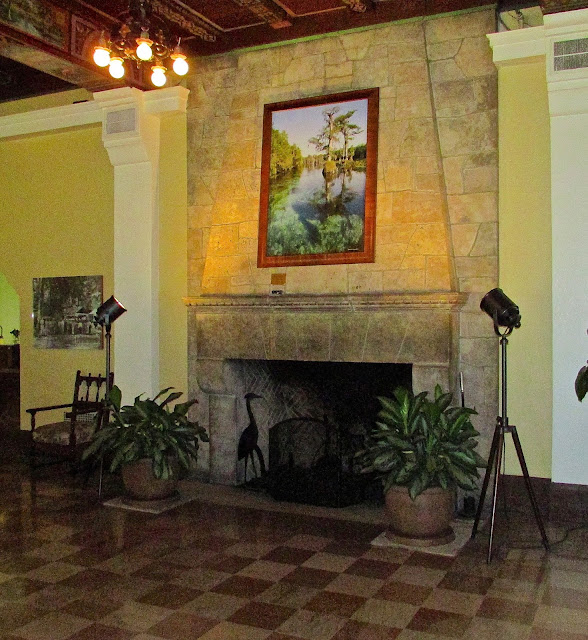 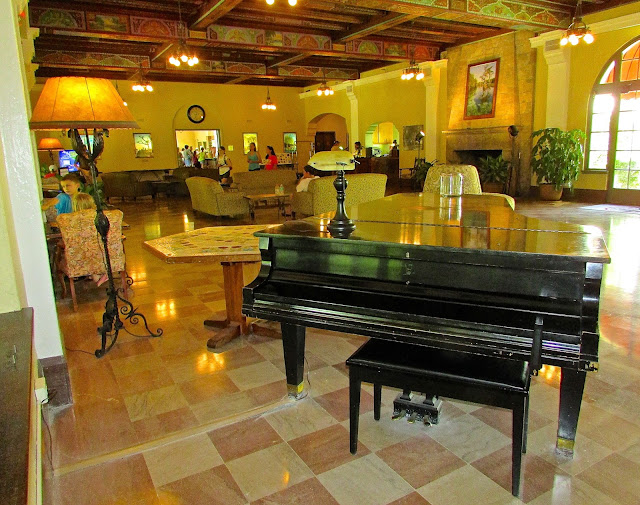 I have visited the Wakulla Springs Lodge many times through the years and I never get tired of admiring this beautiful place. I even spent the night here once many years ago and have also attended weddings on the front porch. The restaurant serves wonderful food and there is also an old fashioned soda fountain with a gift shop. It was built in 1937 and is located in Wakulla Springs State Park just south of Tallahassee. The Lodge overlooks the main spring, which is the largest and deepest fresh water spring in the world. A visit is like stepping back in time. Here are some pictures I took in the lobby of the ceiling, the fireplace and the whole room. You can see the soda fountain through that door at the other end of the room. Those cuties sitting near the window on the left side of the picture are my two oldest grandkids enjoying the view and playing checkers. 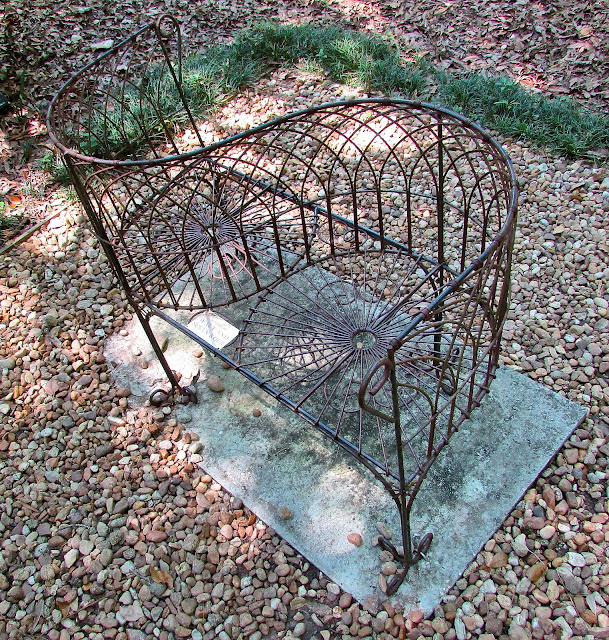 This antique bench is pretty to look at, but I don't think it would be very comfortable to sit in for too long. At least it's in the shade though! It is located in Dorothy Oven Park and the little gold plaque shows the names of the people who donated it.

White ibises hanging around in my neighborhood 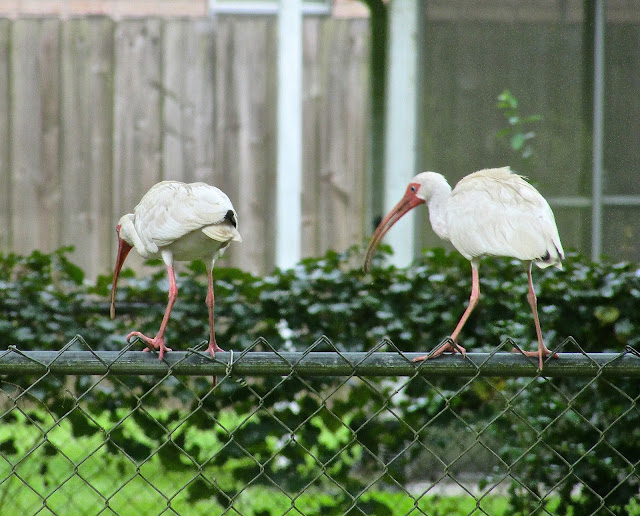 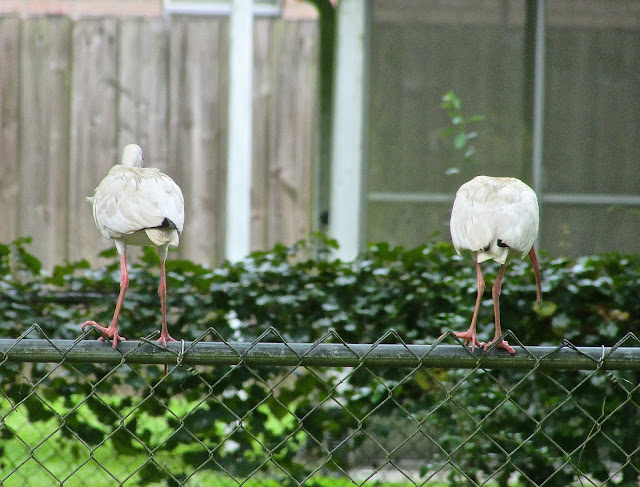 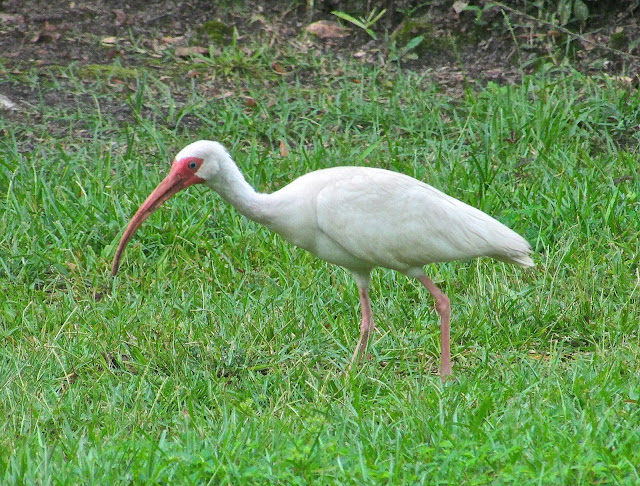 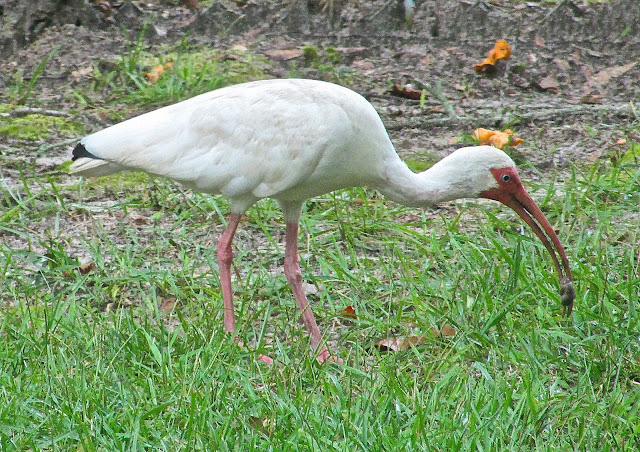 This summer I started noticing a small flock of white ibises that seemed to have adopted my neighborhood as their home. I've lived here for many years and I've never really seen them in my yard because they are generally found wading in water while they look for food and there is no lake or pond in my neighborhood. It's been fun seeing them walk around in people's yards looking for something to eat. Sometimes there is a group of about 10 or 12 together and sometimes just two. I saw two standing on my neighbor's chain link fence one day and used my zoom lens to get the first two shots. They almost looked like they were having a conversation. Later on in the day, I took the last two pictures of a couple walking around in my back yard looking for a meal. I couldn't tell what the one in the last shot had in its mouth, but it was swallowed pretty quickly after I took the picture.

All three of my grandkids started school last Monday, so I'm back to blogging. Now to get out and get some new photos!

Linking to Saturday's Critters, Camera Critters, and The Bird D'Pot.
Posted by Lois at 9:00 AM 25 comments: 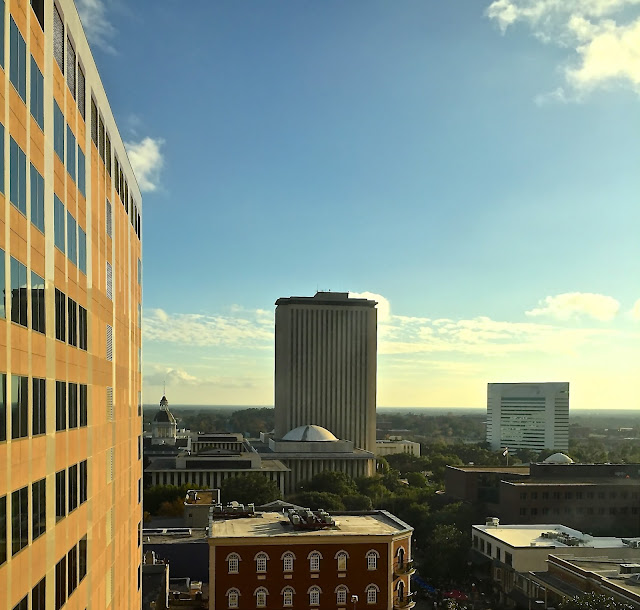 It is a little hard to get a picture of Tallahassee's skyline, not only because there are so many trees and it is probably one of the hilliest areas in Florida, but there really isn't much of a skyline to begin with. I took this picture looking south from the 13th floor of the DoubleTree Hotel in downtown Tallahassee at sunset. In the center of the picture is the 22 story Florida Capitol, often referred to as the "new" capitol, even though it was completed in 1977. The small dome in front of it is the House of Representatives office building. Not visible on the other side of the tower is an identical domed building serving as the Senate office building. The historic old Florida Capitol can be seen directly to the left of the tower. It has been restored to its original 1902 appearance and serves as a museum and tourist attraction. The tall building on the right is the Florida Department of Education and the smaller domed building in front of it is the Florida Supreme Court with the flag flying in front of it. The building partially shown on the left is the Highpoint Center office building next door to the hotel. The Gulf of Mexico lies about 22 miles away in the distance behind those buildings.

The first day of the month is Theme Day in the City Daily Photo community. To see other interpretations of this month's theme, please visit the Theme Day Gallery here.

I hope to be back blogging soon, but I still have two more weeks of grandkid spoiling to go before school starts. See you soon!
Posted by Lois at 1:05 PM 17 comments: