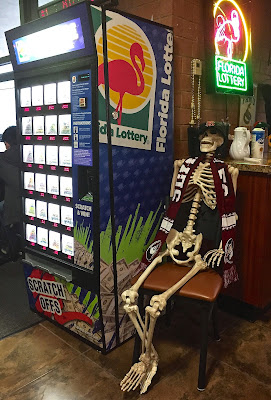 I took this picture at the airport a couple of weeks ago while I was waiting for my flight to depart. I think this guy's luck may have run out while waiting to win the lottery.
Posted by Lois at 12:30 AM 17 comments:

A black bird and a broom 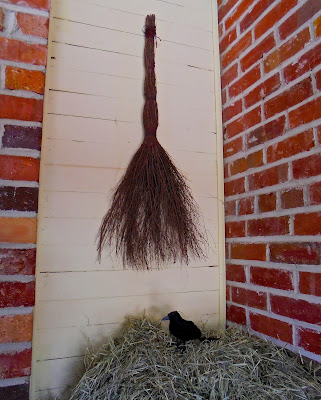 They make a cute and simple Halloween decoration, don't you think? I took this picture inside one of the old shops in Havana while I was enjoying the Pumpkin Festival.
Posted by Lois at 12:30 AM 10 comments: 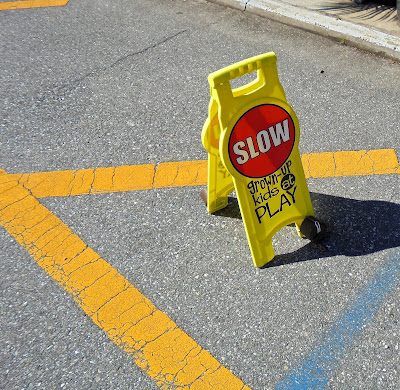 Cute sign seen in the street during the Pumpkin Festival. Linking to signs, signs.
Posted by Lois at 12:30 AM 22 comments: 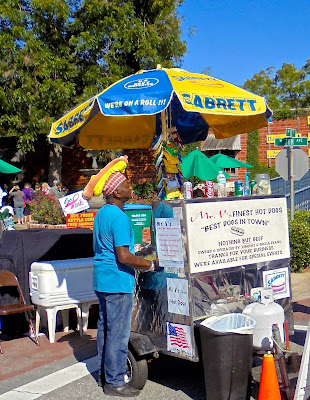 One of the vendors at the Havana Pumpkin Festival. I couldn't resist taking this picture because of his hat.
Posted by Lois at 12:30 AM 13 comments: 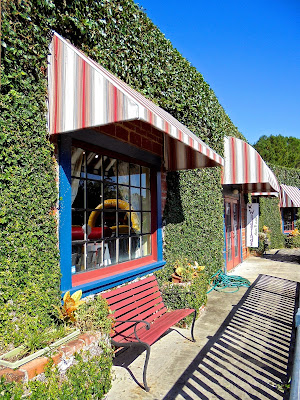 Every October I like to attend the annual Pumpkin Festival which is held in the small town of Havana (Florida, not Cuba) just a few miles north of Tallahassee. There are quite a few interesting shops and restaurants there and this shop is called The Wanderings. You can see a bounce house that was set up in the street in front reflected in the window. Linking to Weekend Reflections.
Posted by Lois at 12:30 AM 16 comments: 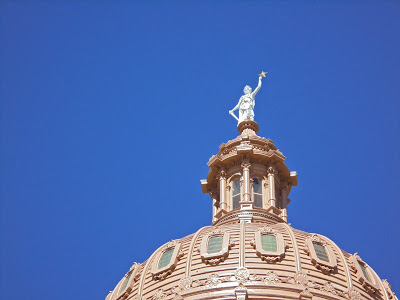 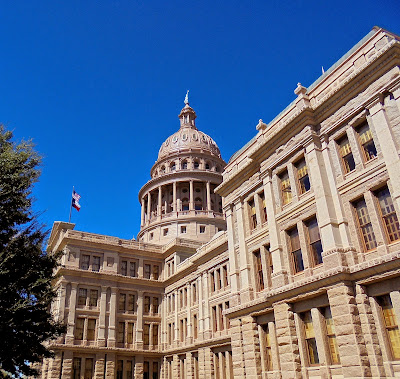 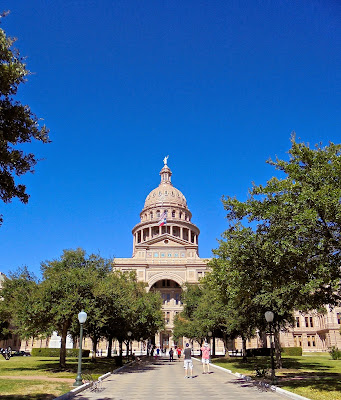 The sky could not have been more perfect on the day I toured the Texas State Capitol in Austin last week. That is the Goddess of Liberty statue standing on top of the dome and is actually a replica placed there in 1986. The original 1888 Goddess of Liberty statue was taken down, restored and moved to the Bullock State History Museum. I'll probably be returning to local pictures this weekend. Linking to SkyWatch Friday.
Posted by Lois at 12:30 AM 22 comments: 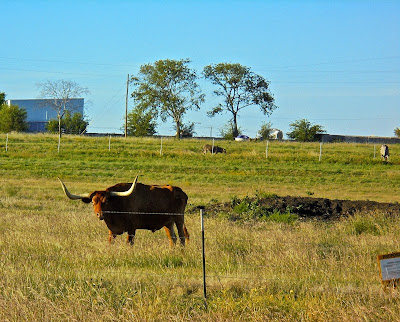 This is another picture I took last week when I was visiting family in Austin, Texas. They live in one of the small towns just north of the city and this handsome fellow posing for me is one of their neighbors. That is a donkey in the pasture directly behind him. Believe it or not, that other animal in the middle on the far right and almost out of the picture is a zebra. You may have to click on the picture to enlarge it for a better look. My sister and I had stopped on the side of the road so I could get a picture, but the cow was so preoccupied with grazing that he would not look up. My sister decided to bust out with a loud "moo" and he looked up just as I snapped the picture. It was pretty funny, but I guess you had to be there. Linking this post to Good Fences.
Posted by Lois at 12:30 AM 21 comments: 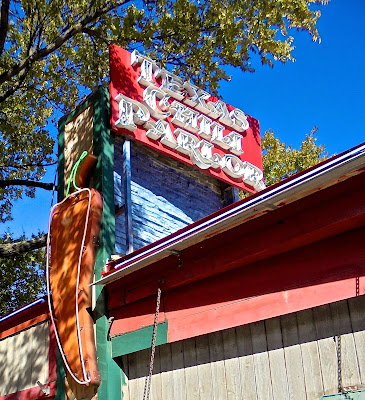 I'm still showing pictures from my visit to Austin, Texas last week. The Texas Chili Parlor is located within walking distance of the state capitol building, which we had just finished touring when we stopped here for a late lunch. The food was fabulous and so was the atmosphere. I also bought one of their cool t-shirts. I liked their sign too, so I'm linking up with signs, signs.
Posted by Lois at 12:30 AM 24 comments:

Another one of Scarlett's dresses from Gone With The Wind 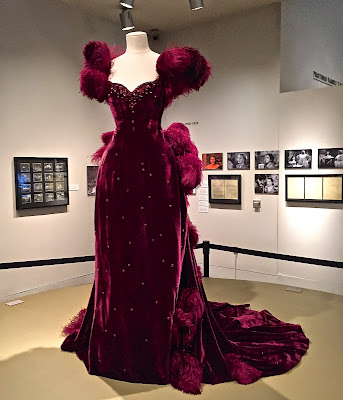 Yesterday I promised to show another picture I took of a dress worn by Vivien Leigh in the movie Gone With The Wind from the exhibition currently on display at the Harry Ransom Center at the University of Texas in Austin. This dress was worn in one of the final scenes of the movie when Scarlett attended Ashley's birthday party. You can't tell from looking at the picture, but Vivien Leigh must have been very tiny to fit into this dress because it is really quite small. This dress is definitely not rubbish, but it is old and pristine and quite vintage so I am linking it to Rubbish Tuesday.
Posted by Lois at 12:30 AM 21 comments:

Scarlett's "curtain dress" from Gone With The Wind 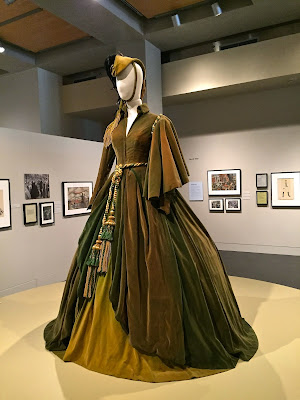 I spent most of last week visiting family who recently moved to Austin, Texas and I had a wonderful time! One of the highlights of my trip was visiting the Harry Ransom Center at the University of Texas where they are currently showcasing an exhibition featuring items from the Center's own collection entitled "The Making of Gone With The Wind" in honor of the film's 75th anniversary. I took this picture of the original dress worn in the 1939 movie by Vivien Leigh as Scarlett O'Hara. In the storyline of the movie, Scarlett fashioned the dress out of her mother's old curtains because she had no money for clothes. She wore the dress in the stable scene of the movie where she visited Rhett Butler (played by Clark Gable) in Atlanta to try and talk him into giving her the money to pay the taxes on her plantation after the Civil War. That's why it is referred to as the "curtain dress". There was also a famous parody sketch done by Carol Burnett on her comedy show many years ago, where she wore a similar dress, but left the curtain rod in at her shoulders and I can't see this dress without thinking about that show because it was so hilarious. You can find out more about this wonderful exhibition and the Harry Ransom Center by visiting their website here. I will show another dress worn by Vivien Leigh in the movie tomorrow.
Posted by Lois at 12:30 AM 11 comments: 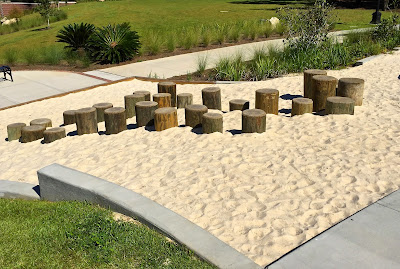 A nice place for the kids to play in the sand at Cascades Park. I will be taking a short break from my blog this week to spend time with family. Be back soon!
Posted by Lois at 12:30 AM 16 comments:

The manmade waterfall at Cascades Park. Linking to Weekend Reflections.
Posted by Lois at 12:30 AM 12 comments: 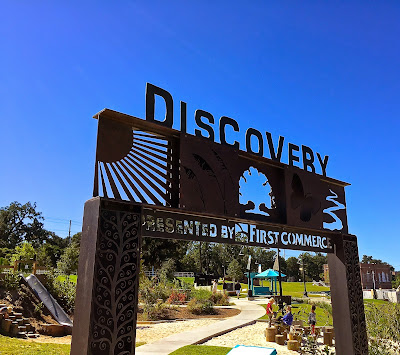 Deep blue skies on a cool fall day can be seen behind the entrance to the Discovery Playscape for kids at Cascades Park near downtown. Linking with SkyWatch Friday.
Posted by Lois at 12:30 AM 13 comments: 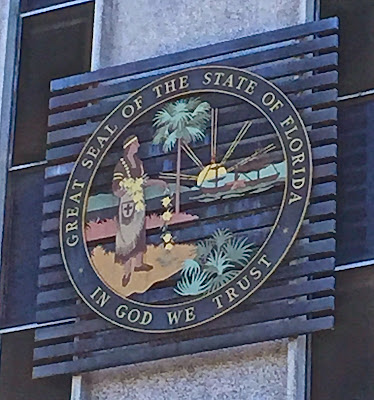 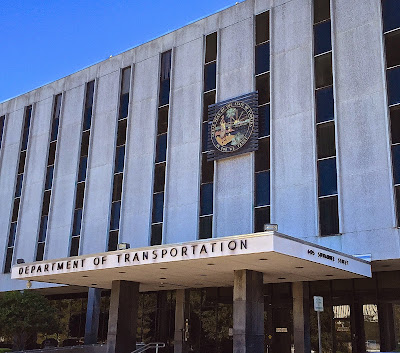 The Florida Department of Transportation headquarters is a rather plain looking building just down the road from the Florida Capitol. The prettiest part of the building is the Great Seal of the State of Florida over the main entrance.
Posted by Lois at 12:30 AM 10 comments:

Signs, signs all in a row 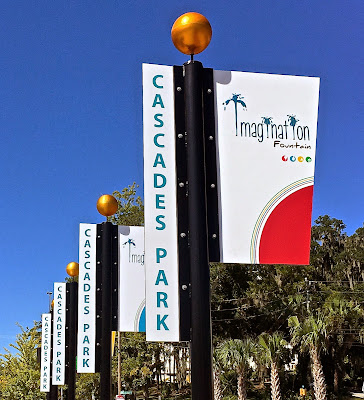 These signs are lined up next to the Imagination Fountain at Cascades Park near downtown. Linking with signs, signs.
Posted by Lois at 12:30 AM 13 comments: 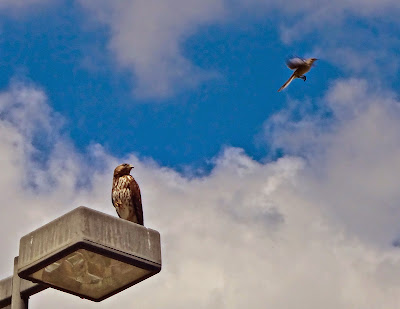 I sat in my car watching this brave little mockingbird torment the hawk sitting on that light post for quite awhile. In this shot, it appears the mockingbird is flying away, but it didn't give up. It kept coming back and dive bombing until finally the hawk got tired of it and flew off to a tree. Linking with SkyWatch Friday.
Posted by Lois at 12:30 AM 15 comments: 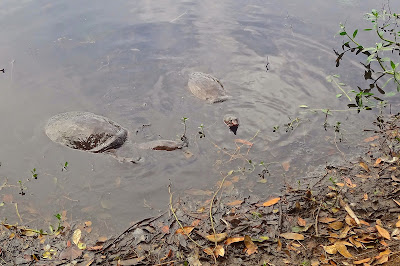 Two Florida Softshell Turtles scavenging near the edge of Lake Ella. These turtles have very long necks and can grow quite big. As you can tell from the one peeking out of the water on the right, they also have long pointed heads.
Posted by Lois at 12:30 AM 11 comments: 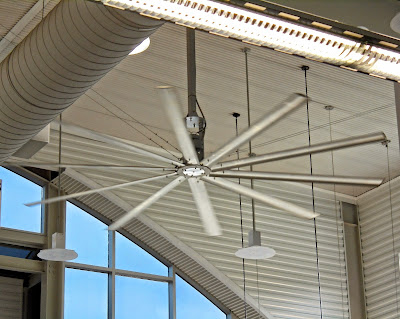 I photographed this industrial sized ceiling fan in the showroom of a local car dealership while waiting to get my car serviced. It was moving very slowly and I'm not sure it was making a difference in how cool it was inside, but watching it reminded me I needed a Theme Day picture and time was running out. To see other interpretations on this month's theme, visit the City Daily Photo community Theme Day page.
Posted by Lois at 12:30 AM 15 comments: