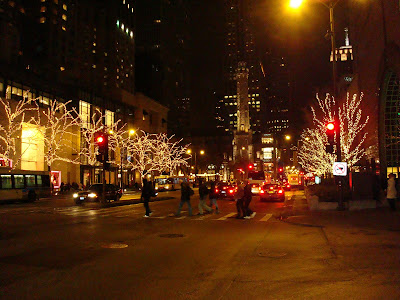 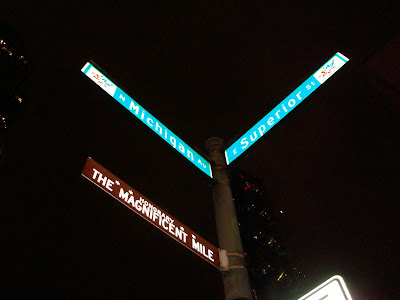 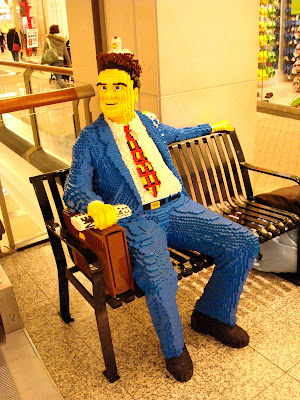 One of the best shopping areas in the country is located on Michigan Avenue in Chicago and is known as the Magnificent Mile. There are so many stores here that it is easy to get overwhelmed. The guy in the last picture apparently had been waiting so long for his wife to come back that a bird built a nest in his hair! He was sitting outside of the Lego store.
Posted by Lois at 5:00 AM 15 comments: 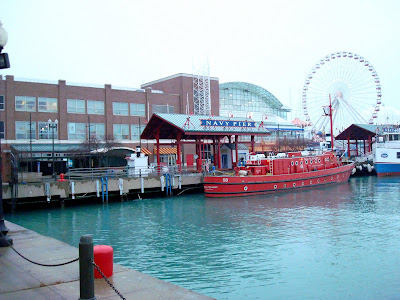 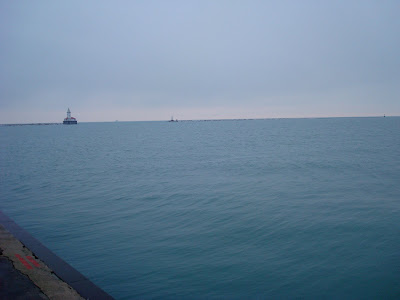 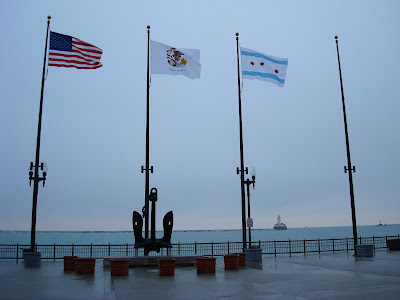 I took these pictures at the Navy Pier in Chicago two weeks ago. It was a very cold and windy day and I did see a few snowflakes. You should really click on the second and third pictures to enlarge them and see the lighthouse out there in Lake Michigan. Also the sign on the pole next to the flag on the right says there is no swimming or diving just in case you were thinking about it! Please visit Watery Wednesday to see more beautiful watery pictures from around the world.
Posted by Lois at 5:00 AM 14 comments: 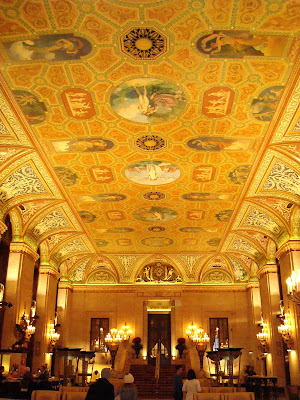 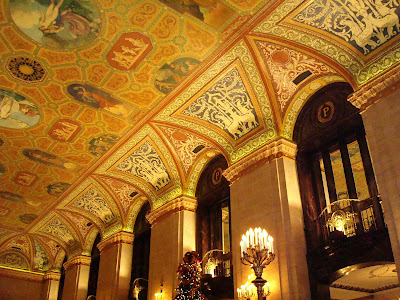 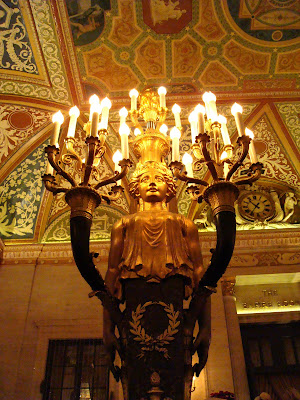 My daughter and I stayed at the historic old Palmer House in downtown Chicago. Built in 1871 by wealthy Chicago business magnate Potter Palmer as a wedding gift to his new bride, Bertha Honoré, the original Palmer House burned to the ground in the great Chicago Fire thirteen days after opening. The second Palmer House was built across the street from the original hotel and opened in 1873, after being funded by a $1.7 million loan, which Potter Palmer negotiated on his signature alone. Since that time, the Palmer House has never closed, making it one of the oldest continuously operated hotels in the United States. It has been through several restorations, including the most recent one which took over 2 years and cost $170 million. It is truly a grand hotel and perhaps the most striking feature is the lobby which I am showing you here today. The lobby ceiling of 21 Grecian paintings was installed in the early 20th century by French muralist Louis Pierre Rigal. He used a vegetable-based paint on the ceiling, two stories above the floor.
Posted by Lois at 5:00 AM 25 comments: 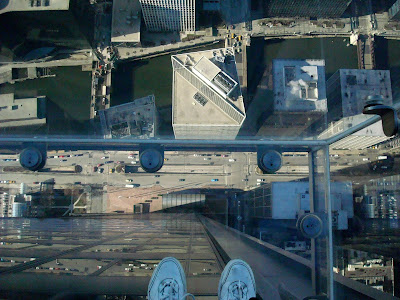 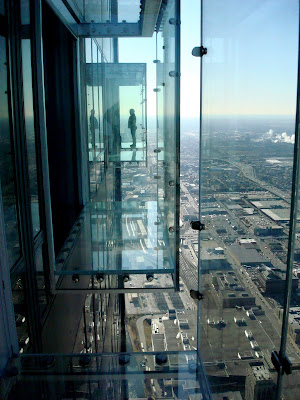 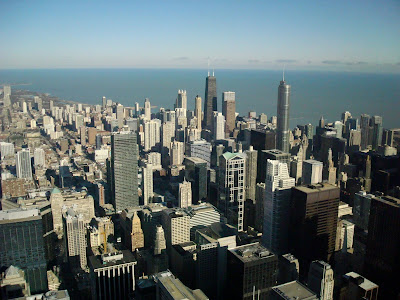 The Ledge is located on the 103rd floor of the Willis Tower (formerly the Sears Tower) in downtown Chicago. The tallest building in the Western Hemisphere, you can see 40-50 miles in all directions and 4 states: Michigan, Indiana, Illinois, and Wisconsin. The glass ledge extends out 4.3 feet from the SkyDeck which is 1,353 feet up from the street. I honestly did not think I would be able to step out onto that glass when I first saw it. I did get a little dizzy and nauseated at first, but then I think my brain adjusted to it and it was actually a lot of fun until some people decided to run up and jump on the glass as hard as they could right next to me! The first shot was taken looking down at the street from the Ledge. You can see the tiny cars and the river below. Those are my feet at the bottom of the picture. The second shot is looking south at the other glass ledges with someone standing on one of them in the distance. The third shot is a classic view of Chicago showing Lake Michigan in the background. Those two tallest buildings are the John Hancock Building (the black one on the left), which has an observatory on the 94th floor and I visited later that week, and the Trump Tower, which has a very warm lobby that my daughter and I took advantage of one night to warm up.
Posted by Lois at 5:00 AM 33 comments: 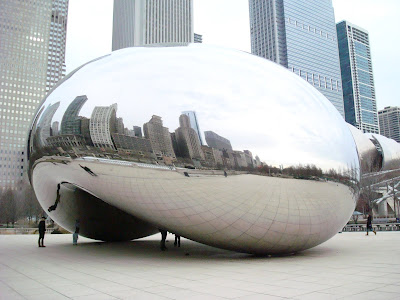 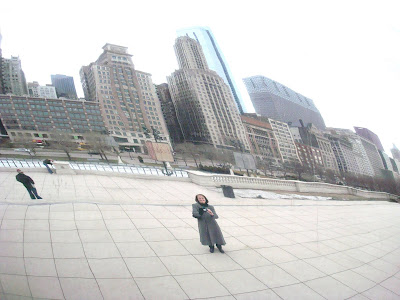 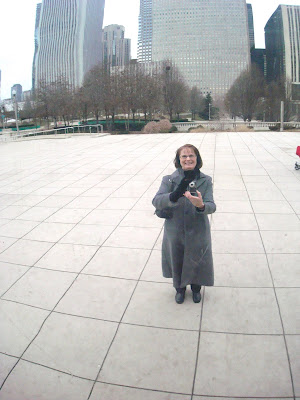 Even though I have been back from my trip to Chicago for almost a week now, I have finally had time to go through my pictures and this week I will be posting a few of them. These pictures seemed perfect for the Weekend Reflections meme and even though it doesn't look like a Christmas reflection, the pictures were taken right before Christmas so I hope that is OK with James! This is the Cloud Gate sculpture located in Millenium Park in downtown Chicago. It was very cloudy, windy (of course) and cold that day. The first picture gives you an idea of how big it is. I am one of the little dots way back there in the distance. The second shot shows me taking a picture of myself from a little closer. You can see some snow on the ground, the ice skating rink and Michigan Avenue behind me. The third shot is me right up there next to the sculpture. I had to take one of my gloves off to be able to operate my camera and by the time I took that last picture, I could barely feel my fingers. Thanks goodness for ear muffs!
Posted by Lois at 5:00 AM 14 comments: 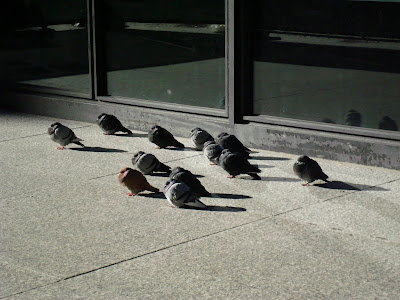 These pigeons were trying to keep warm in the sunshine on a sidewalk in Chicago one morning last week. The temperature was 3 degrees F with a wind chill of MINUS 15 degrees F when we woke up, but had warmed up to 12 degrees F when I took this picture. Click on the picture to enlarge it and you will see how fluffed up their feathers are.
Posted by Lois at 5:00 AM 11 comments: 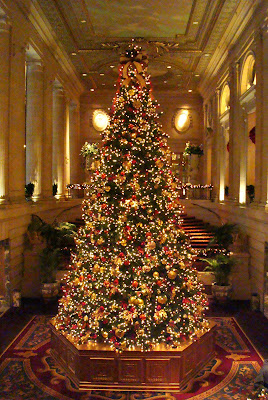 Merry Christmas everyone! This tree was located in the lobby of another historic hotel--the Hilton Chicago on Michigan Avenue. I would also like to wish my son a very happy 28th birthday today!
Posted by Lois at 5:00 AM 14 comments: 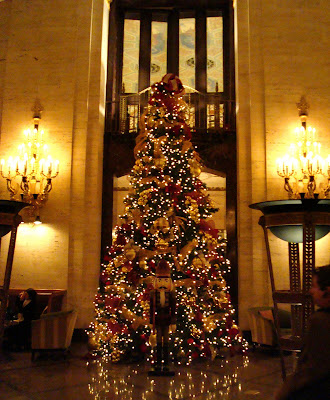 This Christmas tree was looking very festive in the lobby of the hotel I stayed in last week in Chicago--the historic Palmer House Hilton which is the oldest continuously operated hotel in the United States. I hope everyone is having a wonderful holiday season with family and friends. Christmas Eve has become a bittersweet day for me because my Dad passed away on this day five years ago and I am remembering him today.
Posted by Lois at 5:00 AM 24 comments: 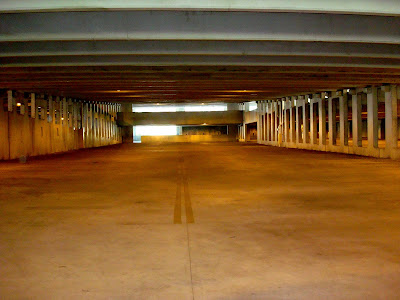 This is what my parking garage looks like this week. It is usually packed full of cars, but it is the break between fall and spring semester at Florida State University and all of the college students have left town and most of the faculty and staff are on vacation for the holidays. Next week the entire University will be shut down and we don't even have to use our vacation leave!
Posted by Lois at 5:00 AM 16 comments: 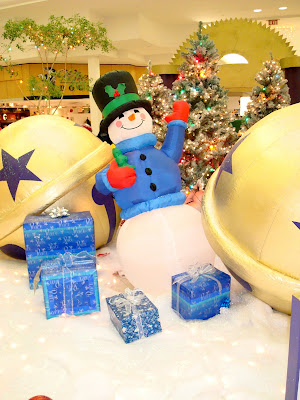 Either this snowman has had some spiked eggnog or he's waving at the ceiling of the Tallahassee Mall. He's located behind Santa Claus.
Posted by Lois at 5:00 AM 17 comments:

This would be a nice present for someone 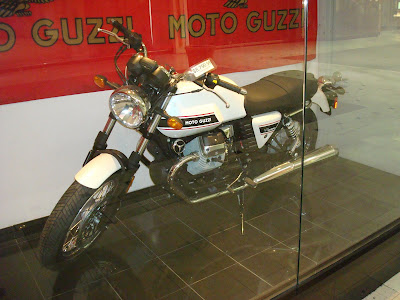 This motorcycle was on display in the window of a store in the Tallahassee Mall. You can see the price tag if you click on the picture and enlarge it.
Posted by Lois at 5:00 AM 8 comments: 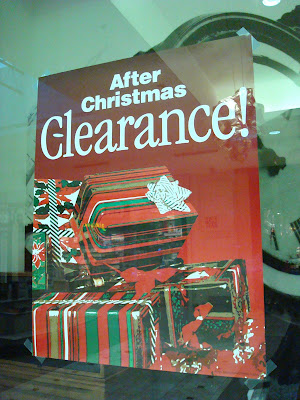 I took this picture on December 7. Apparently this store is trying to get a jump on the after Christmas sales before Christmas is over.
Posted by Lois at 5:00 AM 10 comments: 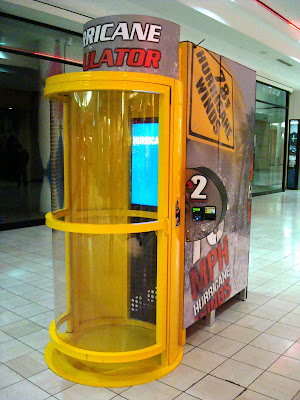 I'm not sure why anyone would want step inside this thing, much less pay $2 to do it. It's located in the Tallahassee Mall.
Posted by Lois at 5:00 AM 17 comments: 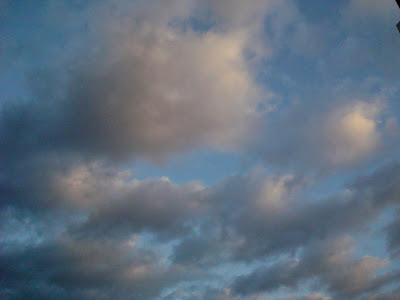 Last rays of sunlight hitting puffy clouds over Tallahassee. To see more beautiful skies from around the world, please visit SkyWatch Friday.
Posted by Lois at 5:00 AM 10 comments: 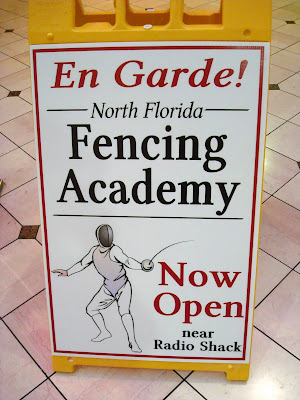 This looks like it would be fun to watch, but it's definitely not for me.
Posted by Lois at 5:00 AM 9 comments: 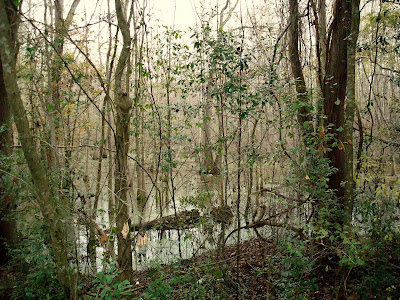 Swamp next to Old Bainbridge Road in Tallahassee. I took this picture on a cold and gray day. I'm sure there are probably some alligators in there somewhere because this is Florida after all, but I wasn't going in any closer to try and find one. There are some things I won't do for this blog! To see more beautiful watery pictures from around the world, please visit Watery Wednesday.

I should mention too that I'm sorry I haven't been commenting on your blogs this week, but I am running around Chicago in the freezing cold having fun with my daughter. I'm taking lots of great pictures too, so I will probably post some of them when I get back. I'm still looking at and enjoying your comments on my posts this week, so thanks!
Posted by Lois at 6:45 PM 19 comments: 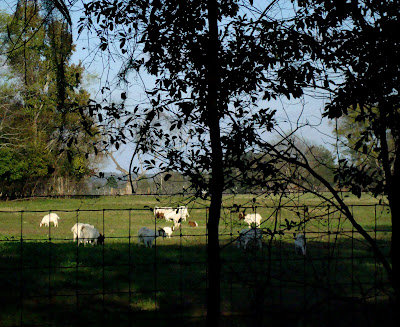 These goats were grazing in the field behind the donkeys from yesterday's post. They were all part of the scenery next to this canopy road near my house.
Posted by Lois at 5:00 AM 14 comments: 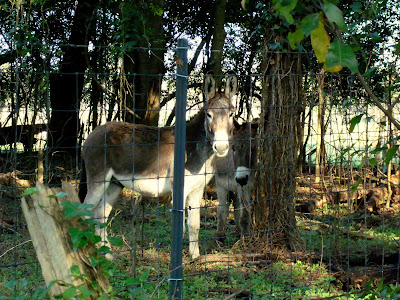 Sometimes you don't realize what you're missing along the side of the road when you are in a hurry and just not noticing. I drive down this road every day and I happened to look over and see these donkeys just minding their own business and watching the world go by. I stopped to get their picture and the one in front actually posed for me. His buddy stopped pulling bark off of the other side of that tree long enough to look at the camera too. Tomorrow I will show you a few of their friends who were grazing in that field behind them.
Posted by Lois at 5:00 AM 21 comments: 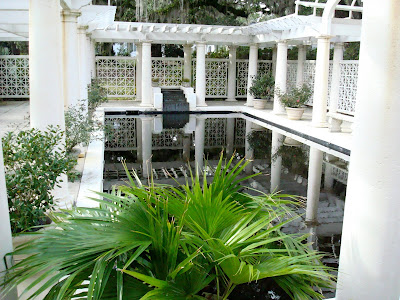 The old swimming pool, now a reflecting pool, at the Goodwood Plantation in Tallahassee. I posted a series of pictures of Goodwood Plantation last December starting here, if you want to take a peek. To see more beautiful reflections from around the world, please visit James at Weekend Reflections.
Posted by Lois at 5:00 AM 15 comments: 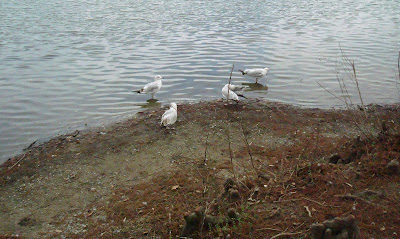 Sea gulls trying to stay warm at Lake Ella during the recent cold weather. The high temperature yesterday did not get out of the 40's, which thankfully doesn't happen too often here! Today it is cold again, with a pouring rain. Christmas shopping should be fun.
Posted by Lois at 5:00 AM 11 comments: