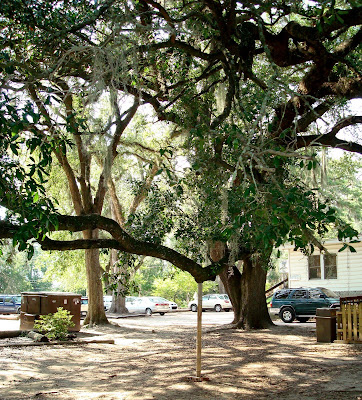 I guess someone thought this oak tree branch needed a little extra support to keep it off the ground. Usually these long heavy branches are left alone and they end up resting on the ground or close to the ground and I think they look nice that way. This tree is located behind a coffee house near Lake Ella. Enlarge the picture to get a better look.
Posted by Lois at 5:00 AM 21 comments: 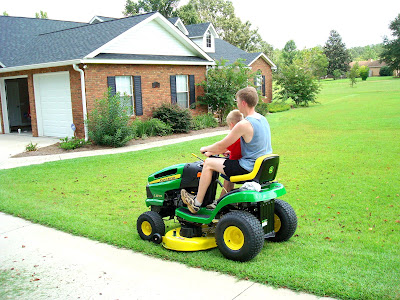 My 5 year old grandson helping his Daddy mow the grass on their new lawn mower. My grandson was so excited and did a lot of squealing while they were mowing. I hope he is still this excited about mowing the yard ten years from now!
Posted by Lois at 5:00 AM 16 comments: 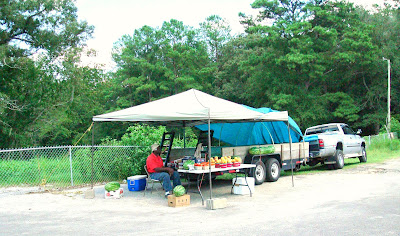 My grandkids and I bought one of those big watermelons last weekend and it sure was delicious. I might try the peaches this weekend.
Posted by Lois at 5:00 AM 14 comments: 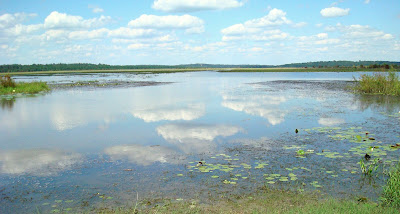 Sky and clouds reflected in Lake Jackson. I took this picture from the boat ramp on US 27 North. This one really is worth enlarging to get see it better!
To see more beautiful skies from around the world, please visit SkyWatch Friday.
Posted by Lois at 6:00 PM 25 comments: 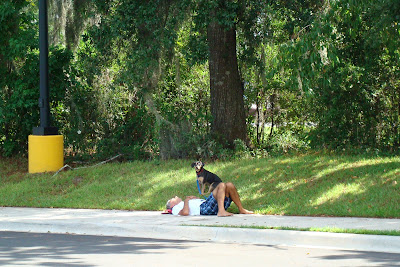 This guy must have gotten tired while walking his dog, so I guess he stopped to take a nap on the sidewalk. If you enlarge the picture, you will see he is using his flip flops as a pillow.
Posted by Lois at 5:00 AM 21 comments: 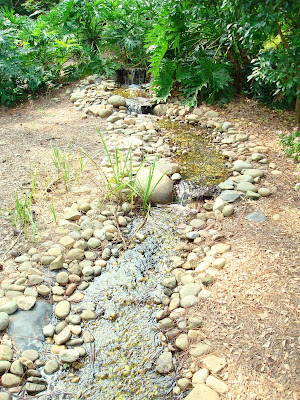 A small waterfall and stream located in Dorothy B. Oven Park in Tallahassee.
Please visit Watery Wednesday for more beautiful watery pictures!
Posted by Lois at 5:00 AM 15 comments: 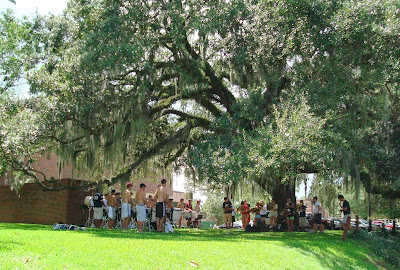 Also located across the street from where I work is the FSU College of Music. All day long last week we could hear the drum line of the FSU Marching Chiefs practicing. They are awesome and so is the rest of the band. I should know, because my daughter was a Marching Chief for four years when she was an undergraduate at FSU.
Posted by Lois at 5:00 AM 14 comments: 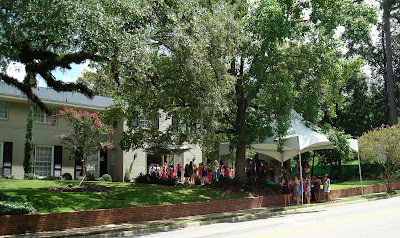 The college students are back in town. If the huge increase in traffic didn't clue you in, riding past the sorority houses will. Last week was sorority rush. That is when all the girls interested in pledging a sorority at FSU attend rush parties and try to decide which one they like the best. The sororities also look over the new crop of freshman and decide which ones they like. You really have to want to join a sorority pretty badly to stand out there in 100 degree heat waiting to be let in. This sorority house is located across the street from where I work.
Posted by Lois at 5:00 AM 18 comments: 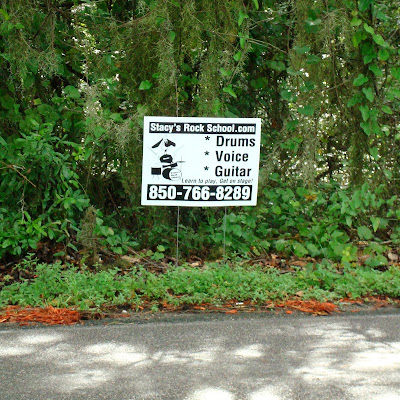 Here's your chance! I would have gotten a little closer to take this picture, but I didn't want to get run over.
Posted by Lois at 5:00 AM 14 comments: 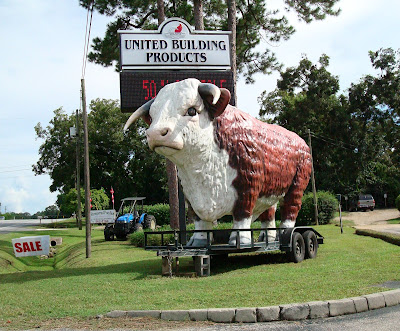 This guy has been begging me to take a picture of him for weeks and I finally felt sorry for him and gave in. I'm not sure if that sale sign means he's on sale or they are having a sale. Probably the latter.
Posted by Lois at 5:00 AM 19 comments: 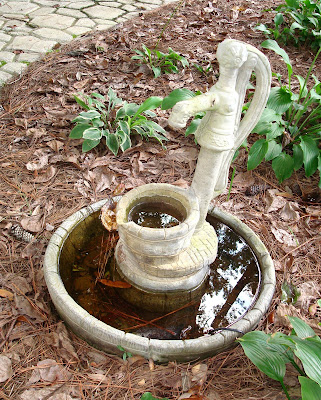 It was a little cloudy on the day I took this picture, but you can still see the sky reflected in the water in this cute little decorative water pump located in Dorothy B. Oven Park in Tallahassee. I think it might be a fountain, but it wasn't turned on when I was there.
To see more beautiful skies from around the world, please visit SkyWatch Friday.
Posted by Lois at 7:30 PM 28 comments: 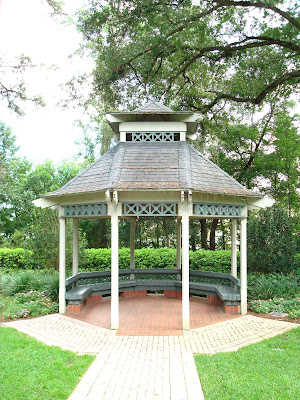 The gazebo at Dorothy B. Oven Park in Tallahassee. This is a favorite spot for outdoor weddings.
Posted by Lois at 5:00 AM 14 comments: 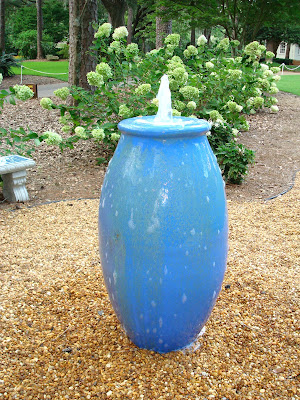 This unusual fountain is located in Dorothy B. Oven Park in Tallahassee. I like how the water cascades down the blue sides and into the rocks it is sitting on. You really should click on the picture and enlarge it to get the full effect!
Please visit Watery Wednesday for more beautiful watery pictures!
Posted by Lois at 5:00 AM 22 comments: 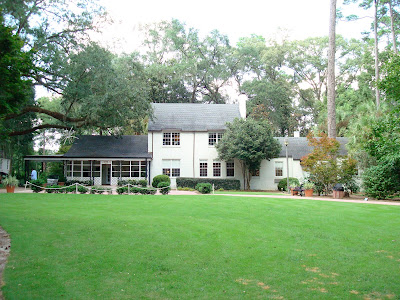 The classic manor style main house in Oven Park features wooden floors, magnolia paneling, antique furniture and artwork. This 6 acre park is located on property which was known as the Camellia Nursery in the 1930's and owned by Breckenridge Gamble and his adopted sons, Ritchie and Bill Rosa. The home was constructed in 1936. After his death, Bill Rosa's widow, Dorothy B. later married Mr. William J. Oven, Jr. After she died, Mr. Oven carried out his wife's wishes and in 1985, the property was donated to the City of Tallahassee and the Tallahassee Friends of Our Parks Foundation, Inc., to be used as a city park.
As I predicted, Tropical Storm Claudette was mainly just a rain event. A few people lost power, but not me, so I was fine. In fact, if I hadn't been watching TV or surfing the internet, I would have thought we were just having our usual summer storms. Hopefully the rest of this hurricane season will be just as uneventful (knock on wood)!
Posted by Lois at 5:00 AM 16 comments: 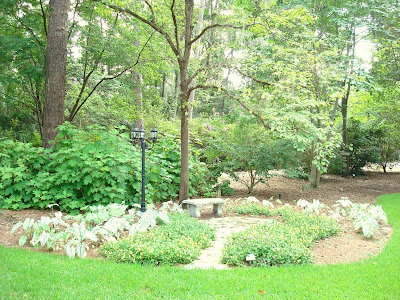 Dorothy B. Oven Park is a beautiful little park maintained by the city of Tallahassee and is a lovely place to go for a walk or picnic and can also be used for weddings, meetings, or other events. We had my daughter's wedding reception here a few years ago. This is a picture of a quiet little sitting area of the park located across from the main house which I will show you tomorrow.
Posted by Lois at 5:00 AM 20 comments: 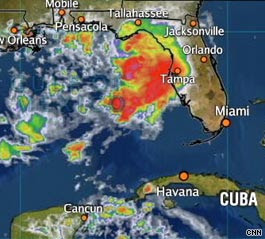 Hopefully this will mostly just be a rain event, but it sure has ruined the rest of my weekend! Now I have no excuse not to do the laundry, but I sure wish I had mowed the yard yesterday.
Posted by Lois at 3:24 PM 15 comments: 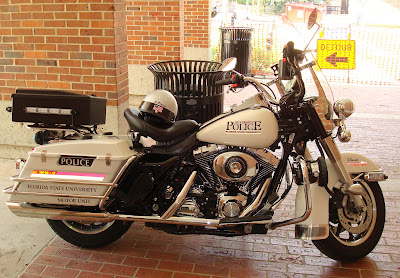 An FSU campus police officer showed up when our fire alarm was accidently set off by the roofers one day last week and I decided to take a picture of his motorcycle for my grandson. They used to ride around campus on bicycles, but I guess they decided motorcycles were a better choice. I've also seen them in SUV's.
Posted by Lois at 5:00 AM 13 comments: 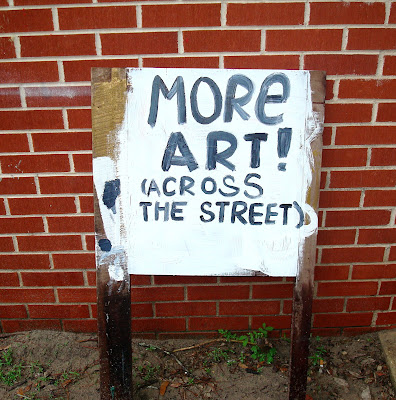 I couldn't resist taking a picture of this sign outside my building. Obviously the art students want to make sure you don't miss the rest of their art!
Posted by Lois at 5:00 AM 22 comments: 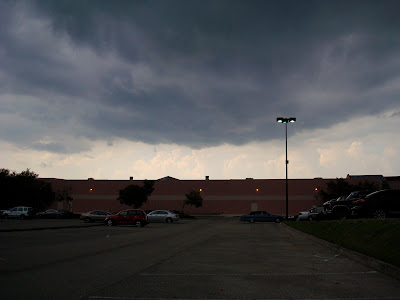 A late afternoon storm rolling in over the Tallahassee Mall. It got so dark that the streetlights came on. To see more beautiful skies from around the world, please visit SkyWatch Friday.
Posted by Lois at 8:45 PM 22 comments: 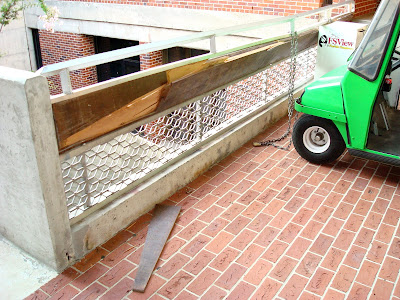 Last week I posted a picture of our little club car at work. Well this is what happens when someone tries to back it up to go somewhere and forgets that it is chained to the building (and no it was not me)!
Posted by Lois at 5:00 AM 17 comments: 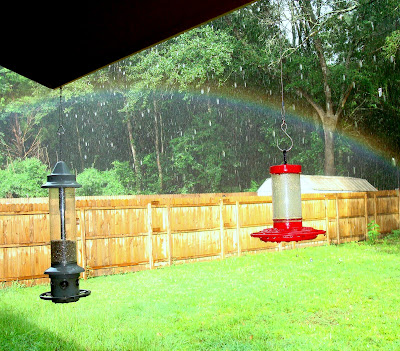 This little rainbow appeared in my backyard late one afternoon last week when the sun came out while it was still raining. Can you see the raindrops falling? I wish it was a little clearer, but I barely had time to take the picture before the rainbow disappeared and I didn't even have time to open the window. My Granny always used to say that when the sun comes out while it is still raining that it means the devil is laughing! 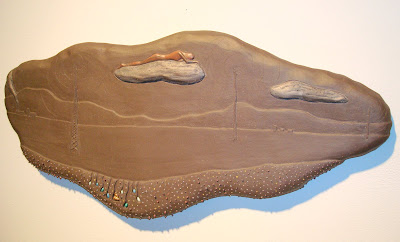 Another piece from the Florida Consortium of Art Schools exhibit at the FSU Museum of Fine Arts. This one is entitled "Drifting" and is by Kristin Schimik from the University of Florida. This picture is definitely worth enlarging to get a better look!
Posted by Lois at 5:00 AM 20 comments: