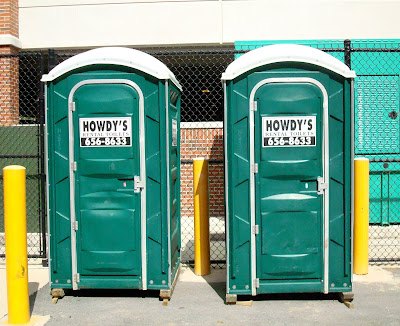 The company that is replacing the roof on the building where I work set these up right before they started the job. I guess they don't allow their workers to come inside when nature calls. It has been so hot here that I can't believe none of them have passed out up there on that roof, but every day they are up there in that hot sun working away. I guess they are glad to just have a job.
Posted by Lois at 5:00 AM 17 comments: 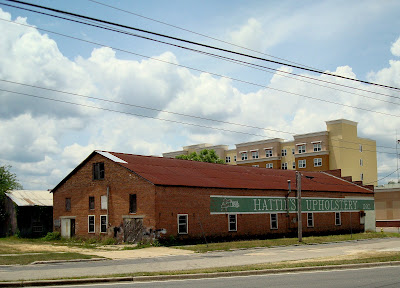 This old building is located near downtown next the the civic center. I have always wondered about Hattie and who she was. Sadly I can't find any information about it.
Posted by Lois at 5:00 AM 21 comments: 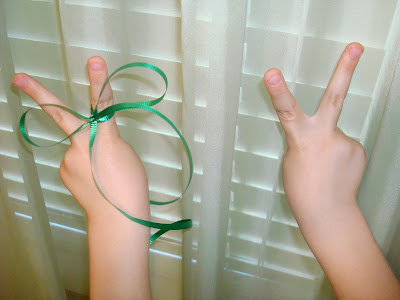 CDP Blogger A. is still missing in Tehran. Today, the CDP community is posting in support of his freedom. Click here to view thumbnails for all participants
Posted by Lois at 5:00 AM 15 comments: 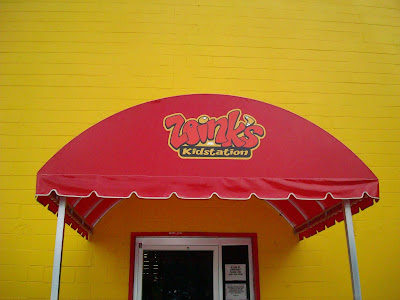 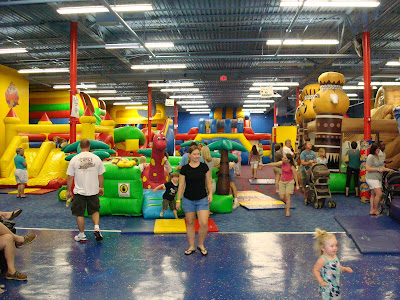 I attended my grandson's 5th birthday party at this place a couple of weeks ago. Whoever came up with the idea of putting bounce houses inside with air conditioning is a genius! Although it was very loud, it was much better than sitting outside in a heat index of 110 degrees.
Posted by Lois at 5:00 AM 12 comments: 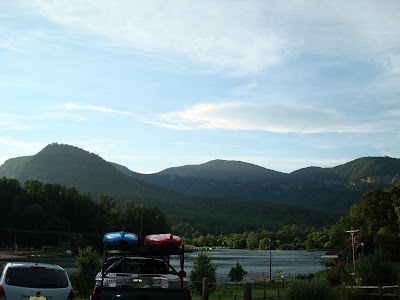 I took this picture when the sun was starting to set over the Blue Ridge Mountains and Lake Lure from the parking lot of the restaurant where we ate dinner one night last week. To see more beautiful skies from around the world, please visit SkyWatch Friday.
Posted by Lois at 5:15 PM 20 comments: 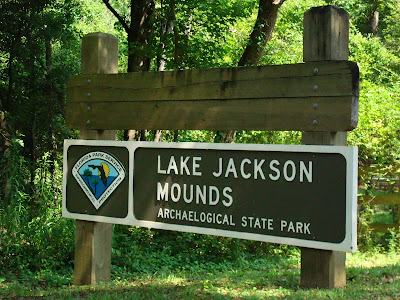 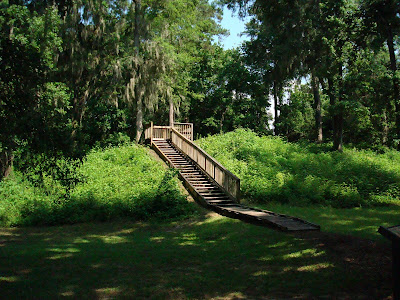 Known as one of the most important archaeological sites discovered in Florida, the Lake Jackson Mounds Archaelogical State Park is located just north of Tallahassee near Lake Jackson. Some of the most significant artifacts in the state of Florida have been found here. The site was once a large ceremonial center dating back to the Fort Walton period of Florida's history (1000 A.D.-1450 A.D.). The entire complex consists of six earth temple mounds and one possible burial mound. At least part of the village and trading area, the two largest mounds and a third smaller mound are located here. Pottery, stone tools and the location and shape of the mounds have been used to identify the age and culture of the site. The remains of important tribal members have also been found with a rich array of burial objects including items such as copper breast plates and shell beaded necklaces. These artifacts provide evidence of religious and trading ties with other large, pre-historic Indian ceremonial centers in the southeastern United States.

This park is located not far from where I live. There is a little creek running through it where my now grown-up kids used to go "creek stomping" with their preschool class. When we first built our house, it was not unusual for my kids to find arrowheads in our backyard. They would also find them on the playground of their elementary school near our house. The second picture is of the largest mound in the park.
Posted by Lois at 5:00 AM 14 comments: 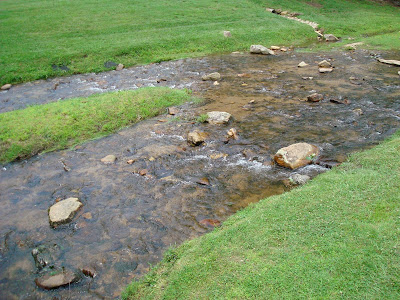 I took this picture from a foot bridge I was walking over in the Blue Ridge Mountains in North Carolina last week. The water was on its way to Lake Lure. Please visit Watery Wednesday for more beautiful watery pictures!
Posted by Lois at 5:00 AM 18 comments: 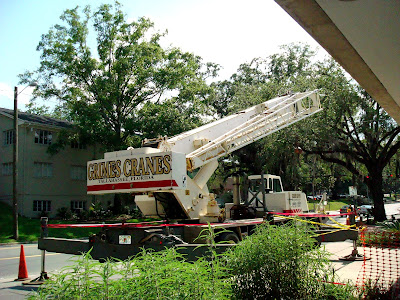 No, it's not a bird, which would be much more fun to look at. We are getting a new roof on the building where I work and unfortunately this crane will be parked out front for most of the summer. Maybe a crane will land on it.
Posted by Lois at 5:00 AM 16 comments: 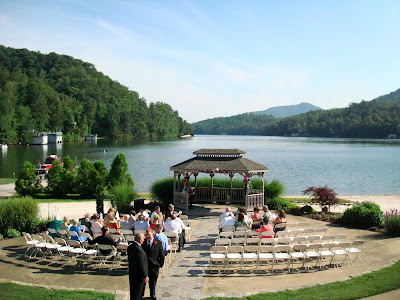 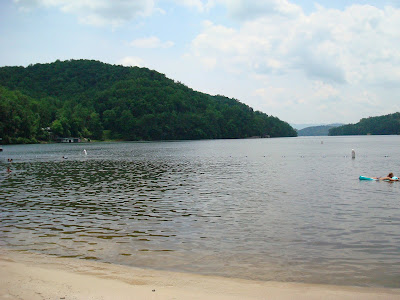 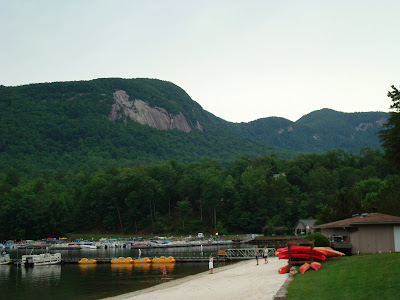 I attended a wedding over the weekend at the Rumbling Bald Resort on Lake Lure in the Blue Ridge Mountains in North Carolina. The scenery was absolutely gorgeous! In fact, parts of several movies were filmed in this area including two of my favorites, Dirty Dancing and Last of the Mohicans. The first picture shows the wedding gazebo and some of the guests already seated as we arrived for the wedding. I took the other two pictures at the rehearsal the day before as the sun started to go down.
Posted by Lois at 5:00 AM 13 comments: 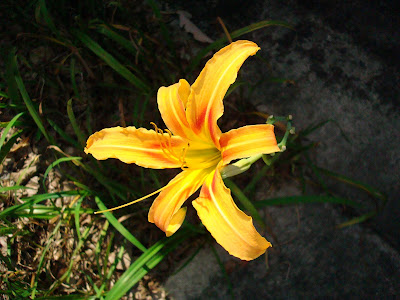 I took this picture early one morning just as the sun was hitting this daylily next to my front door. I love everything about daylilies except for the fact that the blooms only last one day.
Posted by Lois at 5:00 AM 10 comments: 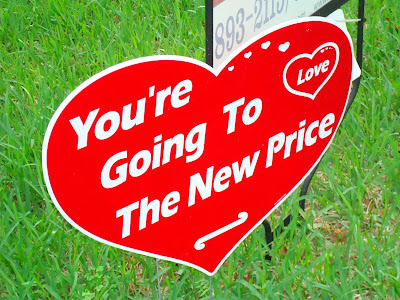 This house has been for sale in my neighborhood for months. Even with the new price, it is still sitting there and will continue to do so I suppose for awhile.
Posted by Lois at 5:00 AM 10 comments: 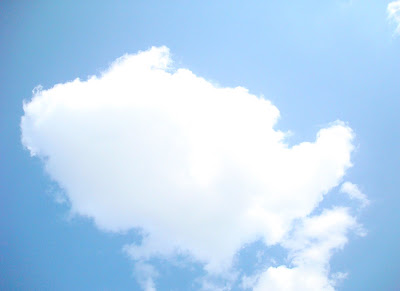 I saw this big fluffy cloud floating over my head while I was taking a walk around my neighborhood the other day, so I took a picture of it. To see more beautiful skies from around the world, please visit SkyWatch Friday.
Posted by Lois at 5:00 AM 5 comments: 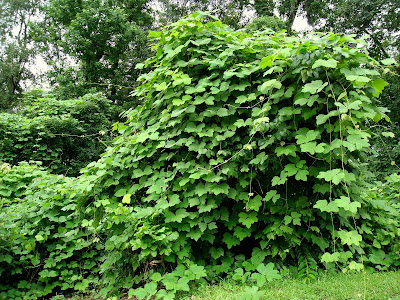 When the weather gets hot, the kudzu starts growing and by the middle of summer it is usually covering everything. This stuff grows everywhere! Kudzu vines were imported from Asia into the southeastern United States in the 1900s by railroad workers, who counted on the deep tuber-like roots to shore up embankments. Used in China as livestock forage, the vines grow as much as a foot a day and can crowd out native plants. A few years ago the city of Tallahassee brought in a herd of sheep to try and control it. Sheep can eat a lot of kudzu! I'm not sure how successful that program was, but it sure was fun seeing the sheep all over town eating the kudzu. I wish they would do it again.
Posted by Lois at 5:00 AM 11 comments: 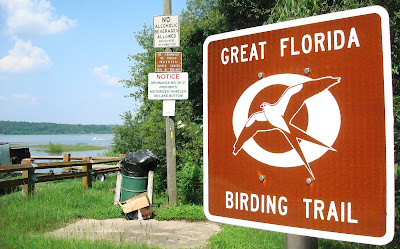 One of the Lake Jackson boat ramps near where I live. Click to enlarge the picture and you can see a boat speeding away in the distance. I liked the signs in this picture. In case you're wondering why motorized vehicles are prohibited on the lake bottom, it's because the lake bottom becomes exposed periodically as a result of Lake Jackson's long history of completely draining into the Florida Aquifer about every 25 years through the two large sinkholes lying beneath it. For this reason, the lake was known to native Americans as "Disappearing Waters". The last time it drained was September 16, 1999. Please visit Watery Wednesday for more beautiful watery pictures!

I won't be able to go visiting your blogs for a few days because I'm going to be busy with a friend's wedding festivities this week. I will catch up after it's over!
Posted by Lois at 5:00 AM 13 comments: 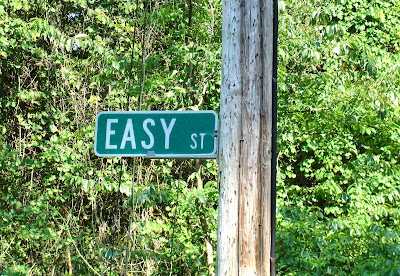 Haven't you always wondered where that was? Well it's here in Tallahassee and no, I don't live on Easy Street!
Posted by Lois at 5:00 AM 17 comments: 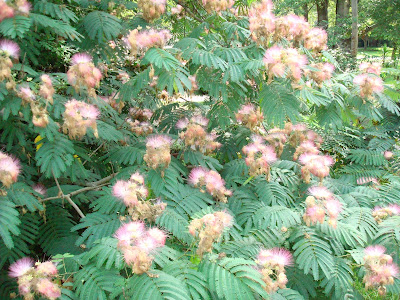 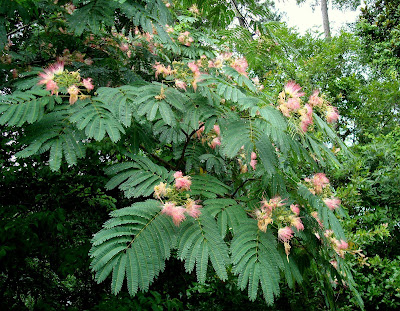 The mimosa trees are in bloom all over town. The first one is in my neighbor's yard. The second one was growing behind the Target store and I took that picture right after it had rained. I love those pink mimosa blooms (even the soggy ones)!
Posted by Lois at 5:00 AM 17 comments: 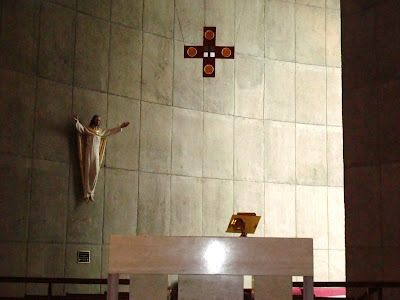 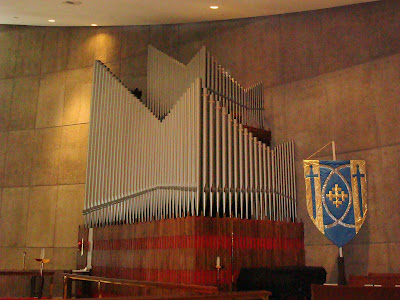 Here are two shots of the interior of the church in Jacksonville Beach I showed you here. It was not easy to get a good shot of the whole interior because it is such a huge sanctuary and because of the lighting. The first picture shows the marble altar, the cross (which is suspended from the ceiling) and the far wall with a statue of Christ. The walls are made of huge coquina blocks. My grandson was fascinated with all the seashells imbedded in the walls. The second picture is the pipe organ.
Posted by Lois at 5:00 AM 15 comments: 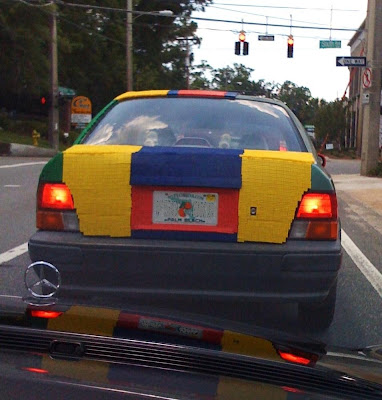 I was sitting in traffic with my daughter the other day and we kept looking at this car in front of us until we realized that it was covered with Legos. My grandson would so want this car! I apologize that the quality of the picture is not what I would usually post, but I only had my iPhone with me and I just had to get a picture. There was no time to get out of the car, so I had to take the picture through our car windshield. I did a little internet research and found out that this car is owned by an FSU Film School student. The car was used as a prop in a student produced film.
Posted by Lois at 5:00 AM 26 comments: 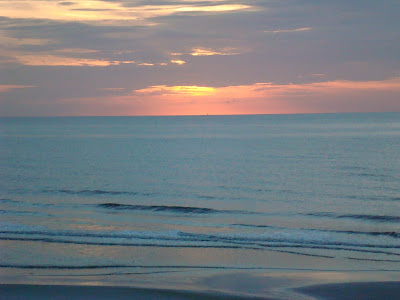 This is the same view of the Atlantic Ocean in Jacksonville Beach that I posted this past Wednesday. This picture was taken just after sunrise. If you enlarge the picture, you can see a ship way out there on the horizon. To see more beautiful skies from around the world, please visit SkyWatch Friday.
Posted by Lois at 5:00 AM 29 comments: 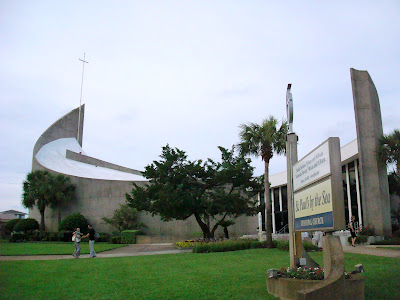 I'm posting another picture today that was not taken in Tallahassee. St. Paul's By The Sea Episcopal Church is located in Jacksonville Beach. This is the church I grew up in and I also got married here. My niece got married here last Saturday. I have always thought it looks like an ark, but my nephew informed me that it looks like a giant skateboard ramp. What do you think? This church was constructed using coquina blocks. It has a huge pipe organ and the acoustics inside are amazing. I took the picture at around 6:30 in the evening and it had been raining all afternoon. That's my sister in the black dress walking away from the church on the right side of the picture. The young couple with the baby on the left side are my nephew and his wife, who is holding my great-nephew. That's the rest of my family hiding behind the sign!
Posted by Lois at 5:00 AM 13 comments: 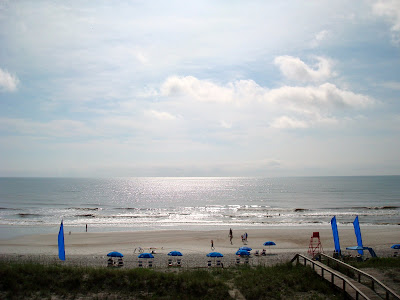 This is the first time I have posted a picture on this blog that was not taken in Tallahasssee. Last weekend I attended my niece's wedding in Jacksonville Beach and I took this picture of the Atlantic Ocean one morning from our hotel balcony. There were thunderstorms about to roll in behind me from the west and I thought the light was so pretty shining on the water. I grew up in Jacksonville Beach. Our house was just a few blocks from where I took this picture and we used to walk to the beach almost every day. On Friday I plan to post a SkyWatch picture of this same scene just after sunrise. Please visit Watery Wednesday for more beautiful watery pictures!
Posted by Lois at 5:00 AM 22 comments: