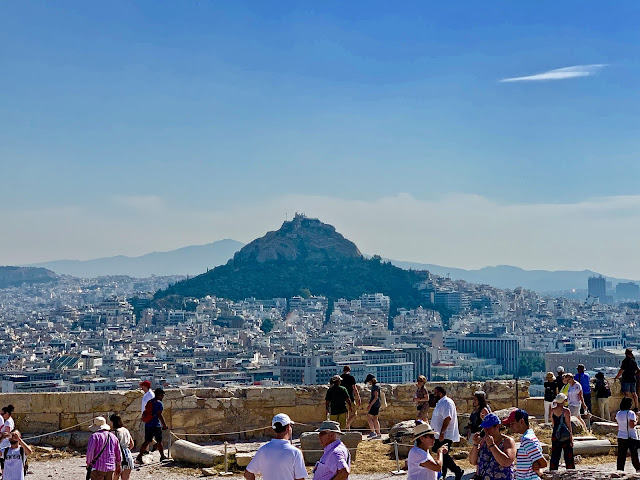 Lykavittos Hill, also known as Mount Lycabettus, seen from the top of the Acropolis in Athens, Greece. According to Greek mythology, Athena, the patron deity of Athens, dropped the rock here by accident when she was creating the Acropolis. The top of the hill used to be barren, until trees were planted there at the turn of the twentieth century. The 19th century Chapel of St. George, a theatre, and a restaurant are located at the top. At a height of over 900 feet (277 meters), Lykavittos can been seen from almost anywhere in Athens.

...nice sky, but the foreground is even better!

That is a great pic, Lois!

Well, I learn something every day...I'd not heard of that hill in Athens.

My first thought was WHAT Sky??? I could not take my eyes off all those buildings clustered around the ROCK! wow and wow again!!! this is awesome

Wow, this is amazing! Now, how do people get up there?

What a fantastic view!

Great shot! Such a beautiful scene. Greece is a place I have always wanted to visit since my teens. One of these days I hope :) I have really enjoyed all your photos, thank you Lois.

Awesome photo, Lois. It's a beauty!

All the best Jan

A beautiful landmark, and one that probably makes it much easier to navigate the city and not get lost!

Isn't that just an amazing outcrop.

Gorgeous shot. We should all be as fortunate as Athena with our accidents.

That is an astounding sight Lois, fantastic view 💛

Wow, that is quite the site.