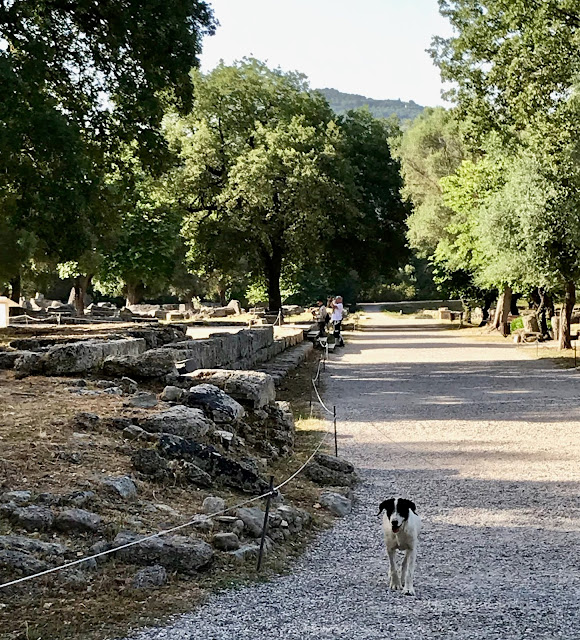 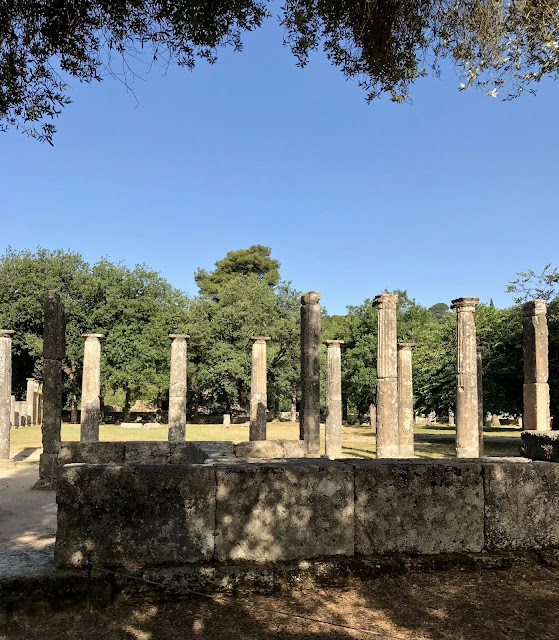 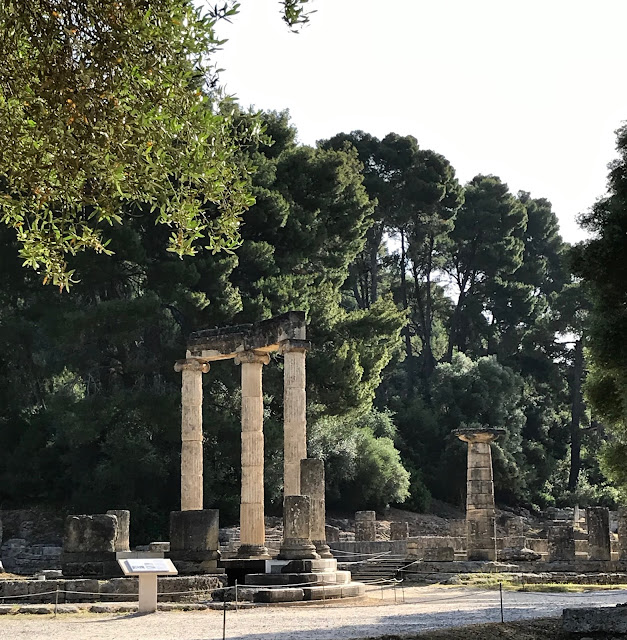 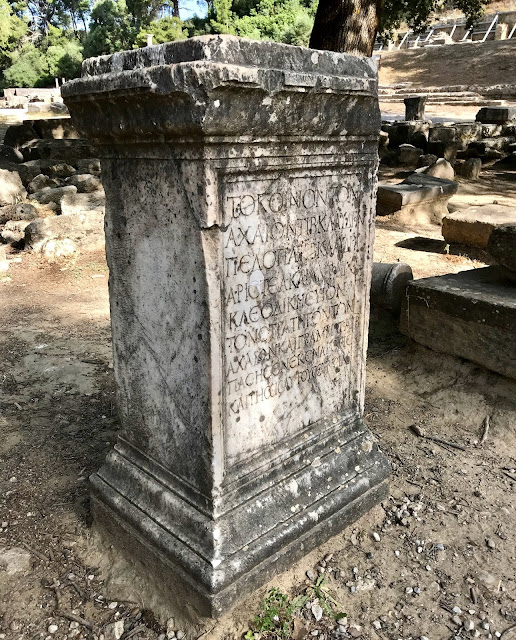 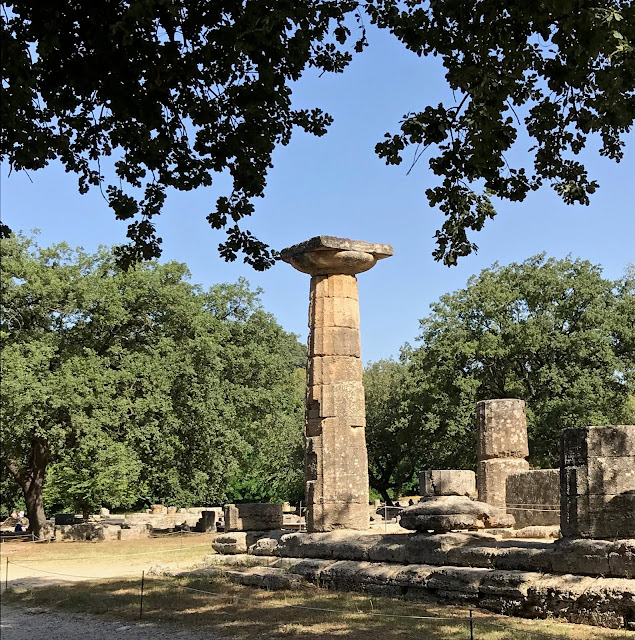 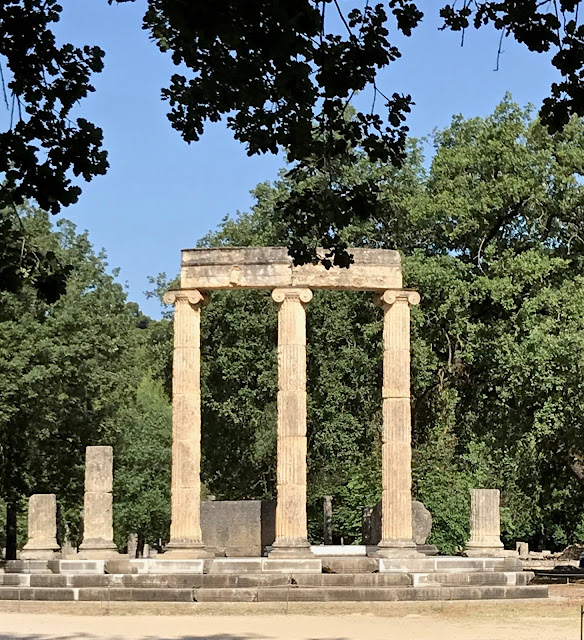 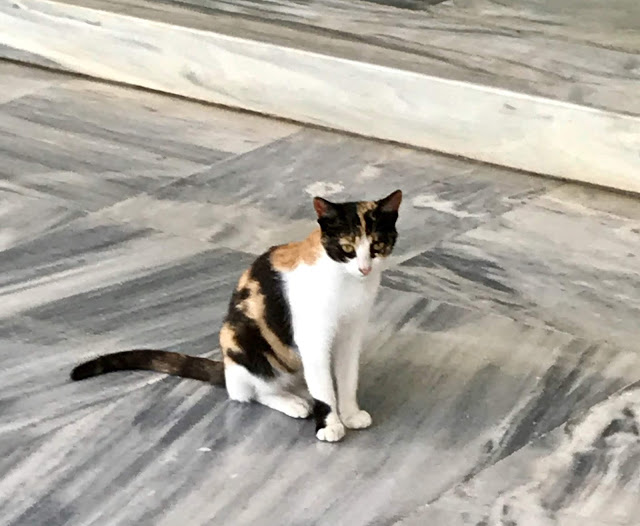 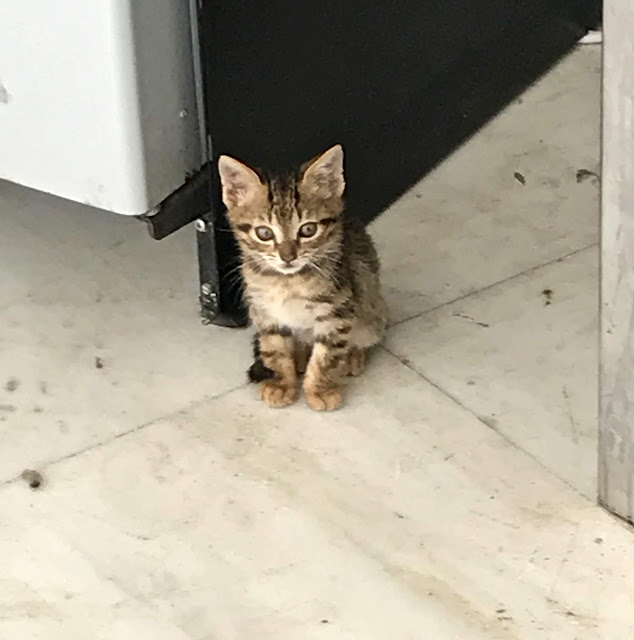 After leaving Athens, we traveled to Olympia, Greece where we were able to explore the Archeological Site of Ancient Olympia. Olympia was the birthplace of the most famous and important sporting event in the ancient world. The Olympic Games took place here every four years from 776 BC to 393 AD. The site was also a place of worship dedicated to the Greek god Zeus from about the 10th century BC. We arrived at the site early in the morning and were able to walk around and enjoy the area before the large crowds of tourists took over. At every place we visited in Greece, there were always several stray dogs and cats wandering around and this site was no exception. I have included a short video showing the stadium where all of the competitions of the Ancient Olympic Games were staged. Spectators sat on the embankments on each side. Only the chariot and horse races were hosted at the adjacent hippodrome.

...for some reason columns seem to survive. I like the calico.

Oh how neat, and considering those athletes competing at the very places! Of course I love your cat photos too! And the bird music for the video...they sing in Greek of course!

Beautiful photos from Greece. I love the cute dog and kitties. Thank you for linking up and sharing your post. Enjoy your day, have a great weekend.

my first meeting Greek dogs and cats. they look just like American dogs and cats. BOL BOL MOL.... so much beauty over there. plus it all looks so OLD. love it

Wow, the birthplace of the Olympics. This is so special. I have read that the athletes performed naked! I guess these are strays that live there, maybe tourists feed them.

What a wonderful trip and such good photos. How neat to see the little kitten and all the 'critters'!

Amazing photos and some cute kitties and dog.

You wonder what the animals think of the place.

Wonderful pics, Lois! I guess there isn't a rodent problem there with all of the cats! I do wonder what the dogs would be eating!

It really is amazing to stand here and image what it must have been like all that time ago Lois. I have been lucky to stand there also, quite a surreal feeling 💛

How nice that you were able to avoid the crowds. Your photos are beautiful!

Wonderful to see this ancient history “live and in person”. You are a good tour guide. It’s interesting to know about the strays..(and somebody must be caring for those kitties, they really look quite healthy!).

Yes, all those cats there, I wanted to take them all with me....

I have to say, it´s amazing, but actually the cats made me go "awwww" :-)
Never would I´ve thought there is so much green around there!
When we were in Greece 1994 there were some Olive trees and that was is. Another time of the year? (I can´t recall the place).

Places like this are so fascinating. I wish I could sit among those ruins, close my eyes and see what life was like back all those years ago.

I've heard about dogs/cats being feral over in Europe. Maybe those people have the right idea...those critters will definitely keep the rat/mice population down!

Lovely tour Lois. I too would rather visit before the crowds show up.

Greek and Turkey. I remember both being famous for the stray animals. In Istanbul, they're being cared for pro bono, in many cases, by veterinarians.