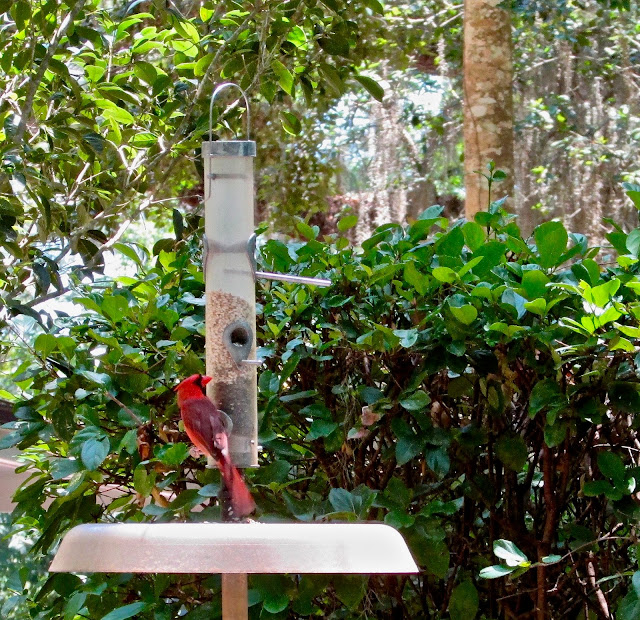 My last photo from Dorothy B. Oven Park shows a beautiful Cardinal on one of the bird feeders.

I am putting my blog on vacation for a few weeks while I enjoy some fun adventures with my daughter and grandkids. See you all soon!

Linking to Saturday's Critters, Camera Critters and The Bird D'Pot.
Posted by Lois at 12:30 AM 24 comments:

Flowers in the Park 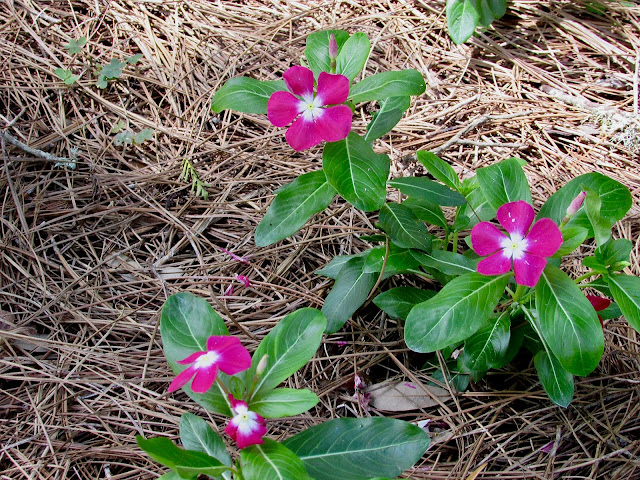 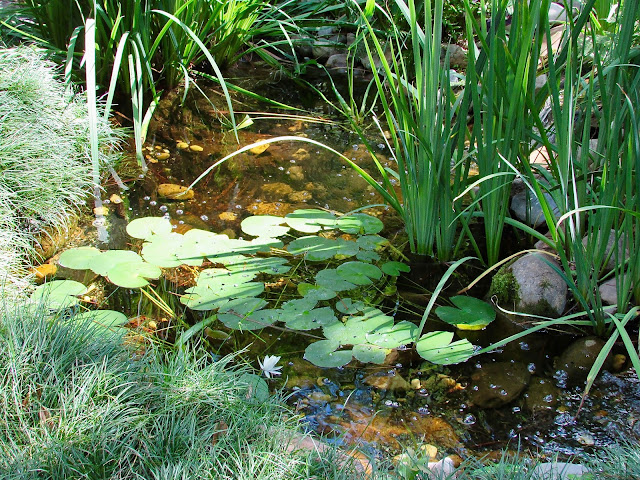 I think those pretty little flowers in the first shot are periwinkles. There is a small water lily in the second photo. 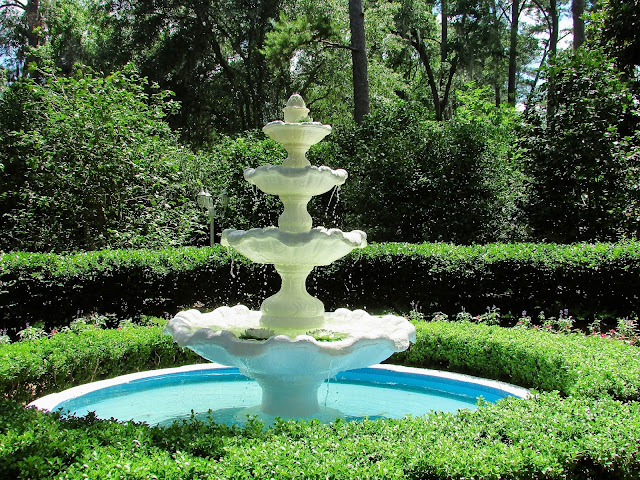 We saw several fountains while walking around Dorothy B. Oven Park. This one was probably the biggest.
Posted by Lois at 12:30 AM 18 comments: 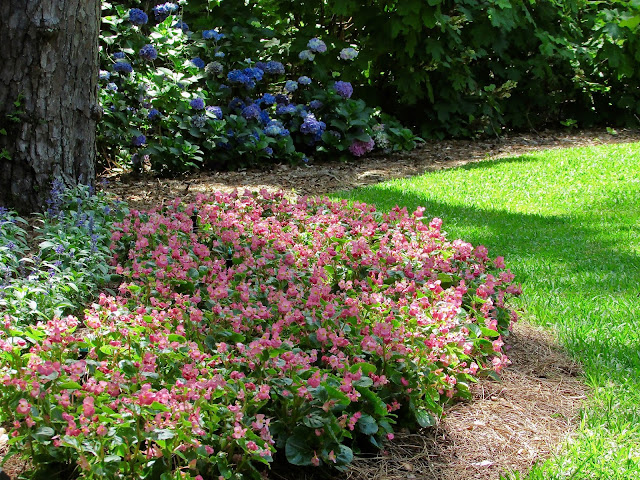 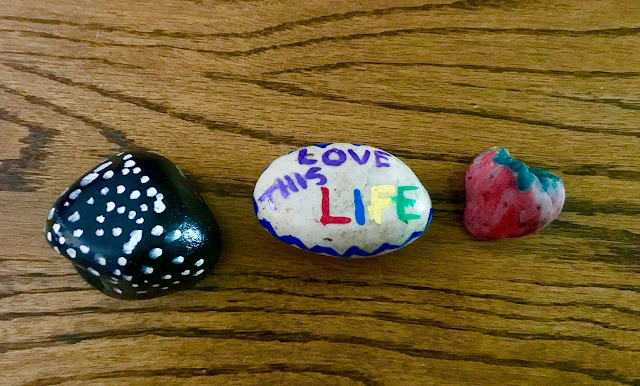 One of the garden areas at Dorothy B. Oven Park is shown in the first picture. The second one shows the three painted rocks my grandson found hidden in the park. If you are wondering about the painted rocks, see my previous post explaining all about them here. 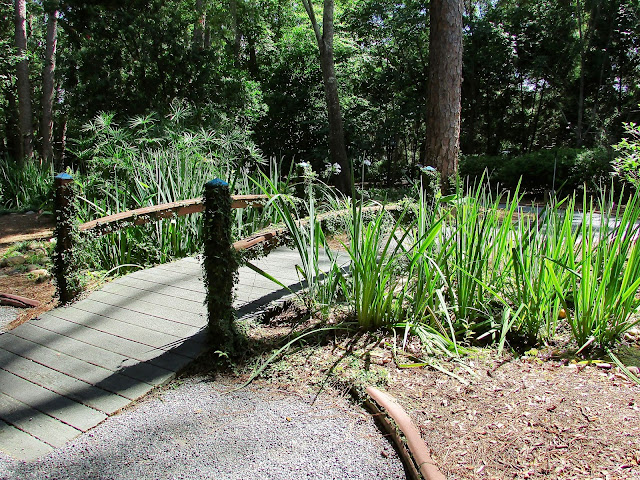 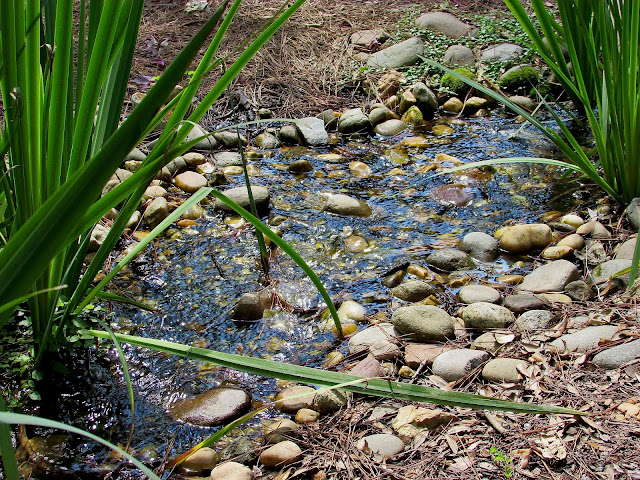 More photos from our walk through Dorothy B. Oven Park. The first photo is a small footbridge on one of the walking trails and the second shot shows the little stream that was running underneath it. The late afternoon sun provided the beautiful light. Would you believe that there is a very busy four lane road on the other side of those trees? 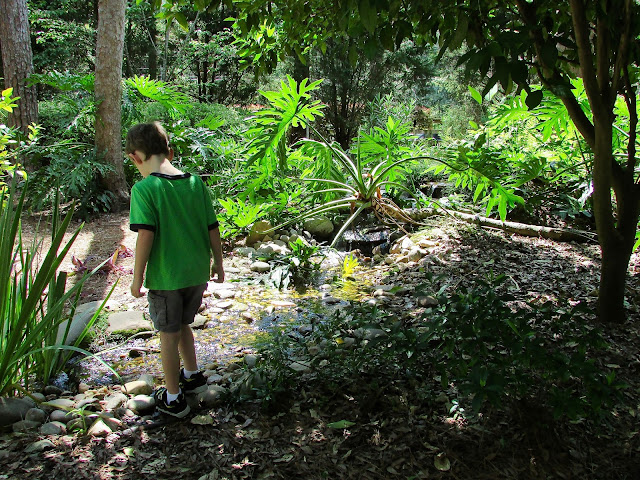 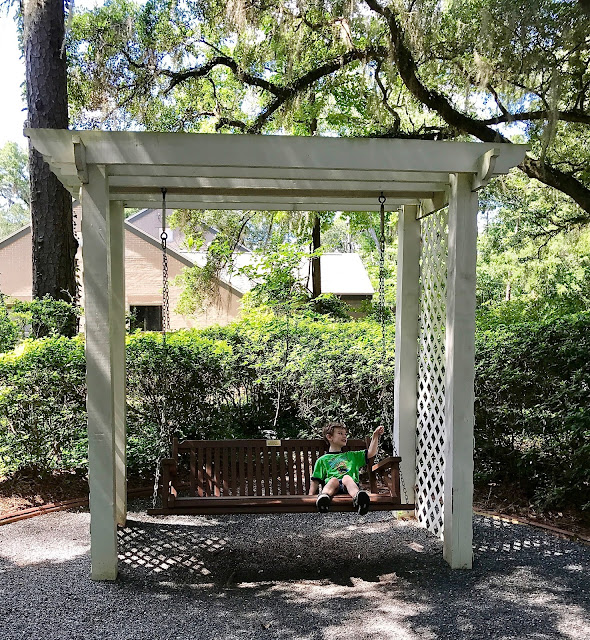 A couple of days ago we had an afternoon of lower heat and humidity, so my littlest grandson and I went for a walk around Dorothy B. Oven Park. This park is one of my favorites because it is so shady and there are swings like the one in the above picture stationed around the park to sit on and just enjoy being outside. This week I will be showing pictures from our walk.
Posted by Lois at 12:30 AM 14 comments: 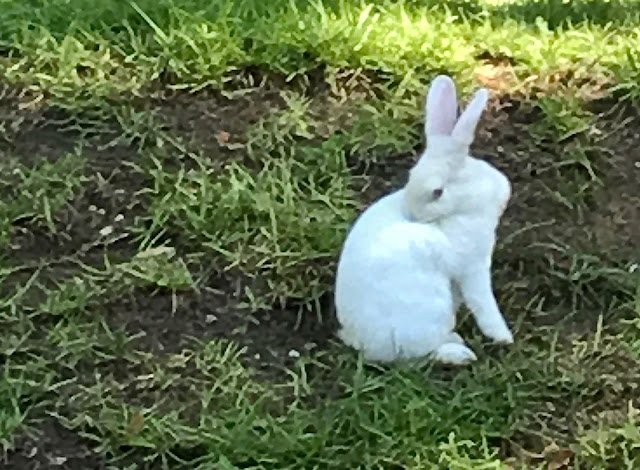 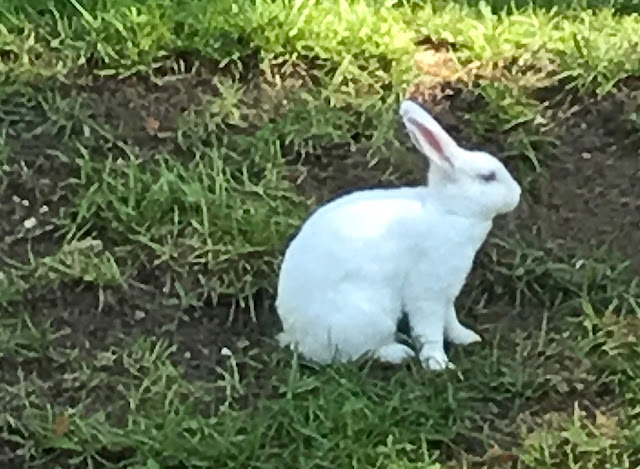 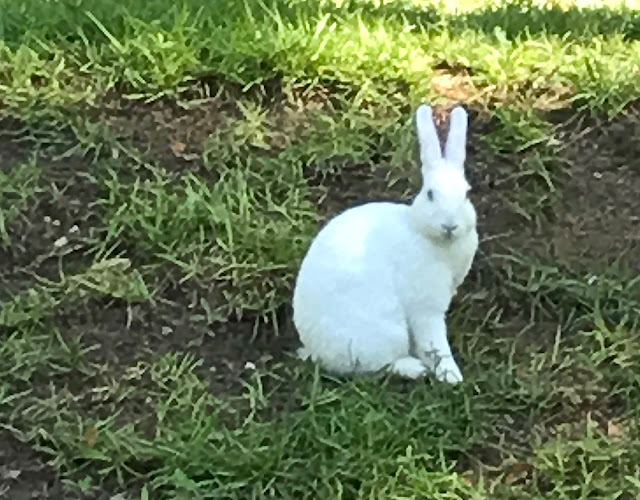 I have been seeing several white bunnies hanging around in my neighborhood for the last three or four months. Sometimes there will be two together and I have even seen three together at one time. Most of the time I just see one and it is usually in the morning or late afternoon. I think they used to be pets and either escaped or were just turned loose. I wish these pictures were clearer, but I had to use my phone to take them when I saw this particular bunny fairly close to the side of the road.

Linking to Saturday's Critters and Camera Critters.
Posted by Lois at 12:30 AM 21 comments: 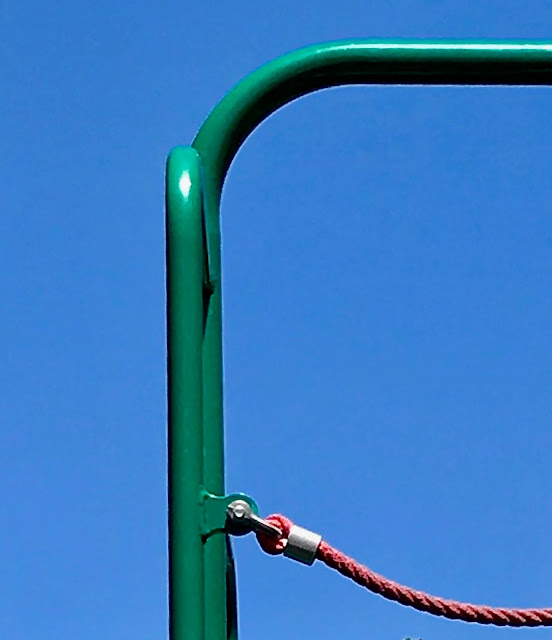 This week we had quite a bit of rain and some pretty intense thunderstorms. We had so much rain at one time that a flash flood watch was issued yesterday afternoon. Earlier in the week, I was sitting in a restaurant and watched a scary bolt of lightning hit a power pole across the street! Thursday started out cloudy and gloomy, but then the clouds cleared and the sun came out so my littlest grandson and I headed to the playground. This is how clear and blue the sky looked. That is part of the playground equipment in the picture.

Linking to SkyWatch Friday.
Posted by Lois at 12:30 AM 20 comments: 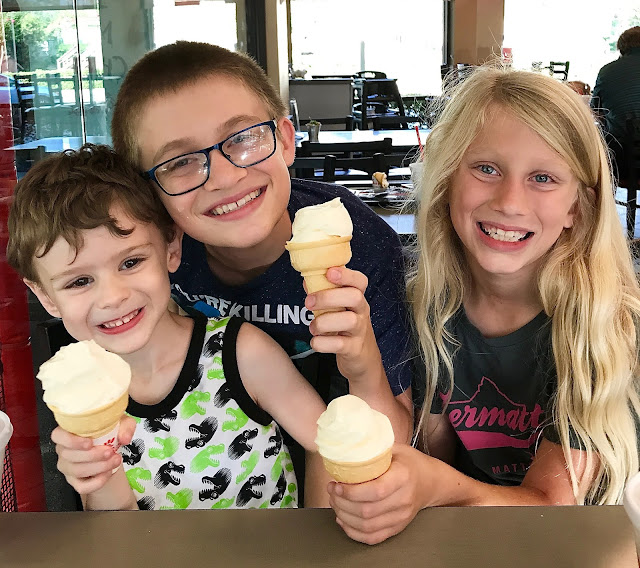 I'm thankful that I am able to spoil these cute grandchildren of mine every chance I get!

Linking to Thankful Thursday.
Posted by Lois at 12:30 AM 21 comments: 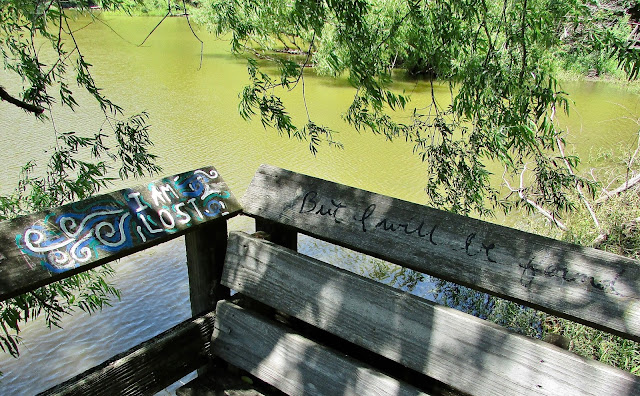 ...but I will be found". Someone's thoughts written on the railing of the boardwalk next to Lake Esther.

Sorry I have been missing for the last couple of days. I had all three of my grandkids staying with me over the weekend and I am just now recovering from all the fun.

Blue skies and a mockingbird 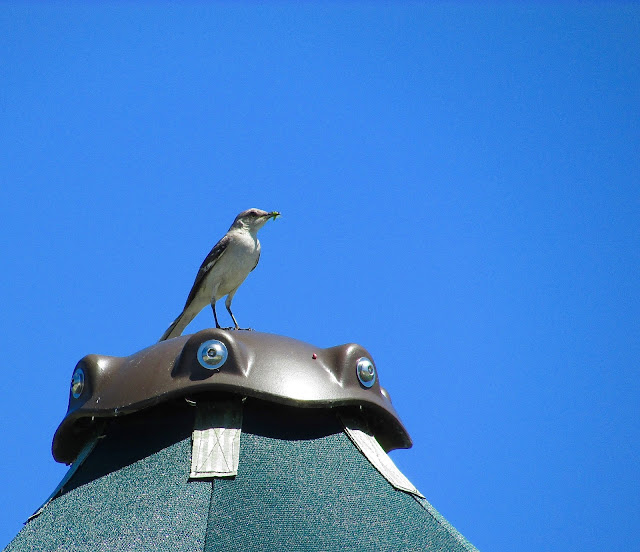 While watching my littlest grandson playing at the park, I zoomed in on this mockingbird standing on top of the playground equipment holding what appears to be an insect in its beak.

Linking to SkyWatch Friday.
Posted by Lois at 12:30 AM 19 comments: 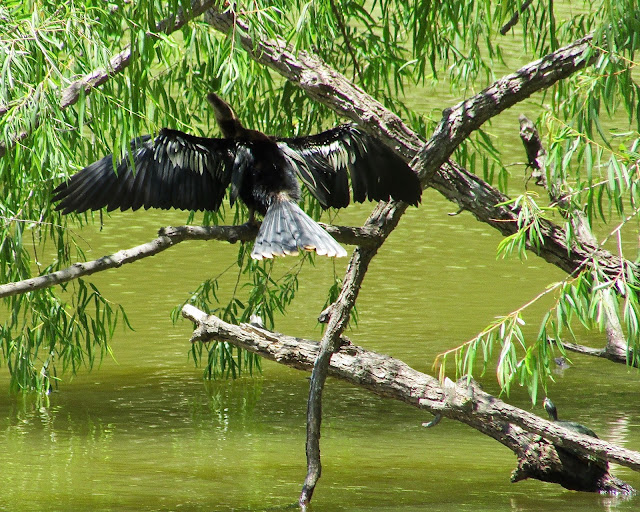 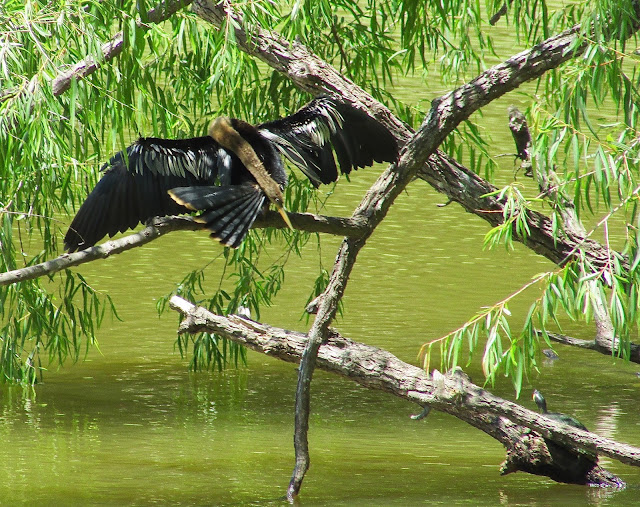 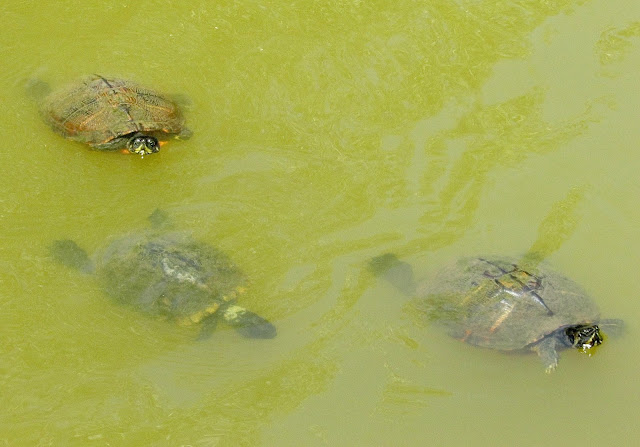 That large bird is an anhinga, sometimes called a snakebird because of its long neck, standing on the branch of the tree and spreading its wings out to dry in the breeze after taking a swim. In the second photo, it appears as though the bird has turned its head around and is stretching that long neck down to scold that turtle sitting below on the other branch. You can really see how long that neck is! The turtle showed no signs of backing down. Those turtles in the last shot were swimming around under the boardwalk I was standing on. I think they thought I had some food. If you are wondering about the color of the water in this lake, I think it is due to an overgrowth of algae because it usually is more clear.

The first day of the month is Theme Day in the City Daily Photo community and this month's theme is nature. To see other participants' interpretations of the theme, visit the CDP Theme Day gallery here.
Posted by Lois at 12:30 AM 18 comments: