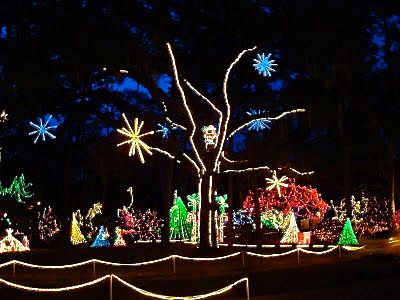 I have been taking a break for the past week or so because of being sick and then the holiday rush, but I am popping in today to wish everyone a Merry Christmas. This is a picture of the annual holiday light display at Dorothy Oven Park. I am spending time with my family this week and next, so I won't be back to blogging until the new year.
Posted by Lois at 12:30 AM 17 comments: 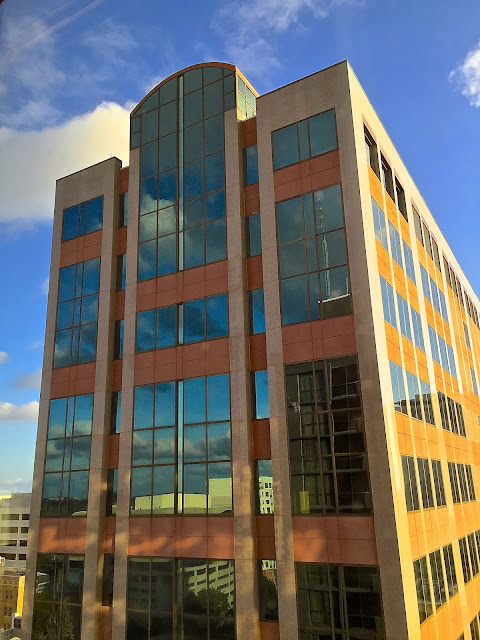 I took this photo from the same window on the 13th floor of the DoubleTree Hotel downtown as the one I posted on Friday. This is the Highpoint Center office building next door. Linking to Weekend Reflections.

Sorry I haven't been visiting and commenting on your blogs, but I seem to have caught a cold from my grandson and I have been living on cold medicine all weekend. I hoping I can get over it soon so I can do some Christmas shopping!
Posted by Lois at 11:35 AM 16 comments: 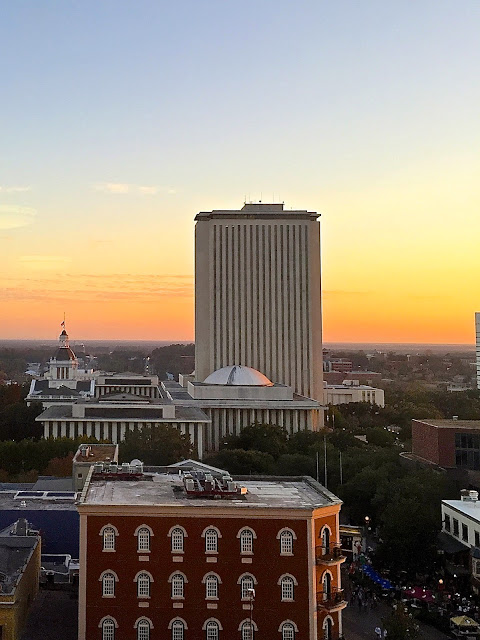 I took this picture looking south from the 13th floor of the DoubleTree Hotel in downtown Tallahassee at sunset. In the center of the picture is the 22 story Florida Capitol, often referred to as the "new" capitol, even though it was completed in 1977. The small dome in front of it is the House of Representatives office building. Not visible on the other side of the tower is an identical domed building serving as the Senate office building. The historic old Florida Capitol can be seen directly to the left of the tower with the flags on top. It has been restored to its original 1902 appearance and serves as a museum and tourist attraction. The brick building in the foreground is a downtown office building. The Gulf of Mexico lies about 22 miles directly south of where I took this photo. On the street below, the Tallahassee Winter Festival is going on, which is where I took the picture I posted on Monday here. Linking to SkyWatch Friday.

Note that the flags on the old Capitol are flying at half staff in honor of Leon County Deputy Christopher Smith, who was shot and killed in the line of duty the Saturday before Thanksgiving by someone who set his own house on fire and then ambushed Deputy Smith when he was the first to respond. The shooter then proceeded to walk down the street and fire at police and firefighters until he was killed by an off duty police officer who lived nearby. This incident happened in my own neighborhood on a quiet Saturday morning. I was sitting in my living room and heard all the gunshots and sirens. Very scary!
Posted by Lois at 12:30 AM 21 comments: 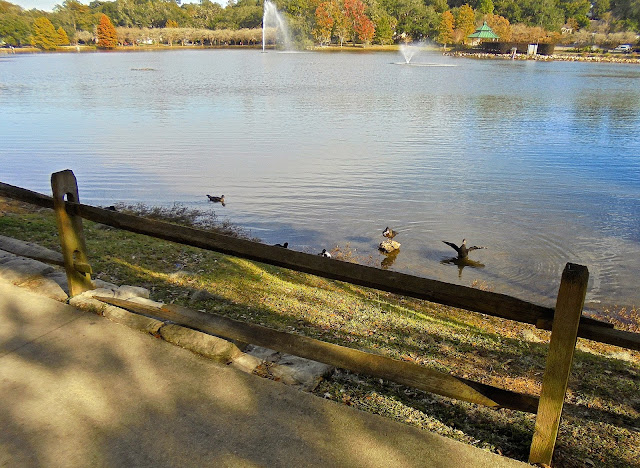 This fence seems to be in need of a few repairs, but the ducks at Lake Ella don't seem to mind. Linking to Good Fences.
Posted by Lois at 12:30 AM 21 comments: 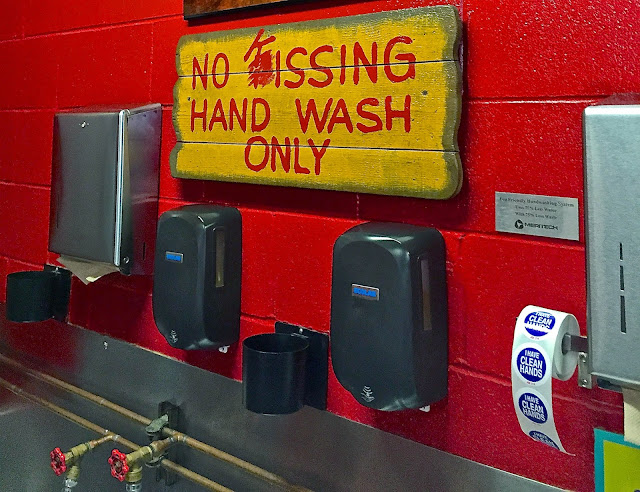 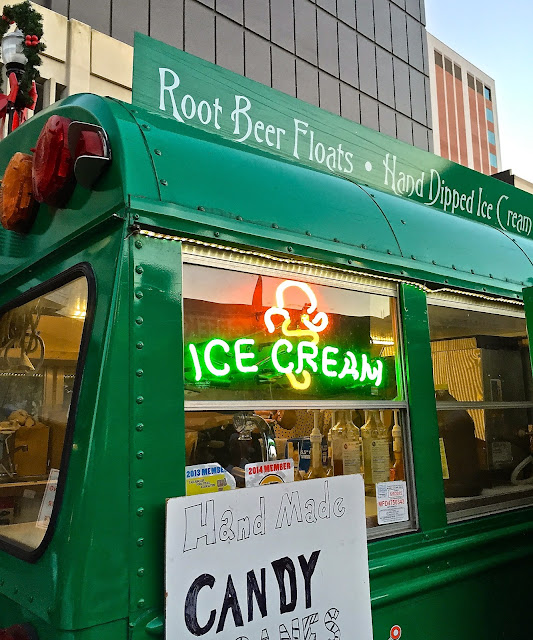 One of the more popular food vendors at the Tallahassee Winter Festival this past weekend. Who can resist handmade candy canes, root beer floats or hand dipped ice cream, especially when it is served from a converted school bus! This particular vendor is Lofty Pursuits and you can view their website here.
Posted by Lois at 8:03 AM 13 comments:

Sorry lady, but this table is taken 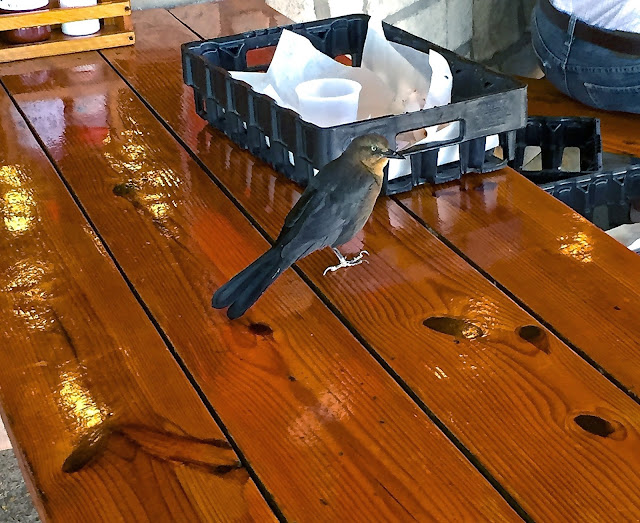 I found this photo in my archives and I have to admit it was not taken in Tallahassee. I took it when I was visiting family in Austin, Texas a couple of months ago. We had stopped for lunch at Rudy's Country Store and Bar-B-Q and this little bird was guarding someone's leftover tray at one of the outdoor tables. I had forgotten that I took the picture and couldn't resist posting it. The bird was being very protective of its lunch, so I was able to get really close for the picture. I have no idea what kind of bird this is, so if you know please tell me in the comments. Because the wood table is so shiny and there are a few reflections, I am linking up with Weekend Reflections.
Posted by Lois at 12:30 AM 20 comments: 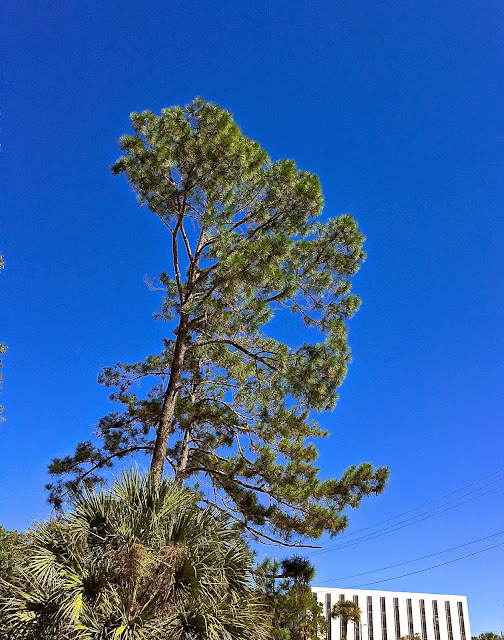 I never get tired of seeing these beautiful deep blue fall skies. Even though we do have some fall foliage here in north Florida, the palms and pines stay green all year. That is the Florida Department of Transportation headquarters building in the background. Linking to SkyWatch Friday.
Posted by Lois at 12:30 AM 16 comments:

Looking through to the other side 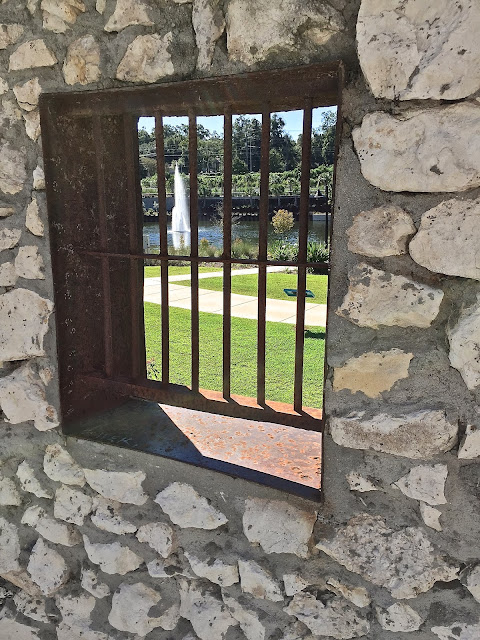 This stone wall runs along the street next to the sidewalk by Cascades Park. I like the way they placed windows in the wall so you can get a view of the park as you walk by. I guess the bars are there to keep people from climbing through. It's not quite a fence, but it serves the same purpose, so I'm linking up with Good Fences.
Posted by Lois at 12:30 AM 27 comments: 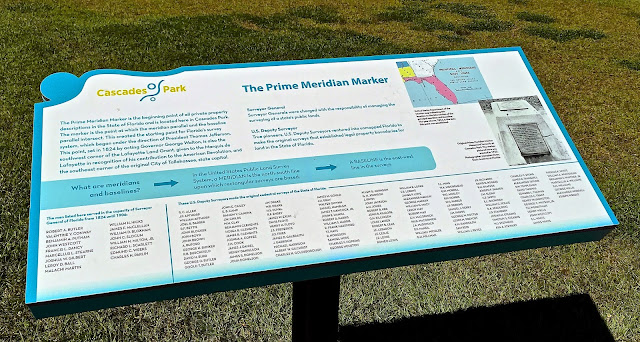 The Prime Meridian Marker is located in Cascades Park near downtown Tallahassee and is the beginning of all private property descriptions in the state of Florida. The marker is the point at which the meridian parallel and the baseline parallel intersect and creates the starting point for Florida's survey system, which began under the direction of President Thomas Jefferson. The point was set in 1824 by acting Governor George Walton. You can see the location of the marker sitting on a giant map of the state of Florida in the second picture (black arrow). Linking to signs, signs.
Posted by Lois at 12:30 AM 15 comments: 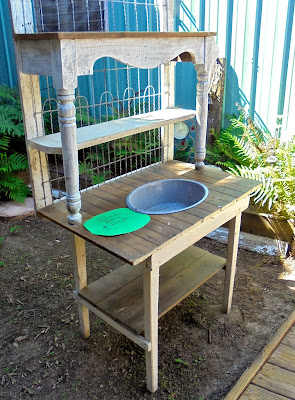 I spotted this old potting bench outside an antique store. The green paper says the price is $275. I don't think I wanted it enough to pay that price, but it is nice. Sorry for not posting and commenting last week. I had family visiting for Thanksgiving and got to spend some fun time with all three of my grandchildren. Linking to Rubbish Tuesday.
Posted by Lois at 12:30 AM 16 comments: